An outpouring of support has helped a Whakatāne school recover from a devastating fire. 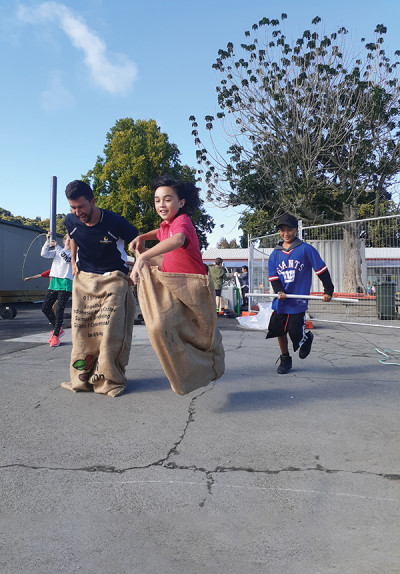 Cameron Grieve from Sport Bay of Plenty races to the finish line with Reuben (Year 6). Dayton (Year 6) is keeping an eye on things.

Just a couple of days into the 2021 school year, Apanui School principal Simon Akroyd got a call no principal wants to get in the middle of the night.

Fire destroyed eight classrooms right through the middle of the school. Within days, staff and about 400 pupils were relocated to community facilities at the Whakatāne War Memorial Hall.

“The fire was Friday night/Saturday morning; we met with the Council on the Saturday afternoon and they offered the use of the hall,” says Simon.

“We shut the school on the Monday and that allowed us to come and have our blessings of the site, get out what we could and get ourselves set up in the War Memorial Hall, which ended up being home for the next month or so.”

Classes were shoehorned into various spaces, says Simon, including a theatre, the theatre wings and a large gym, which was the ‘blow off steam’ space.

“It was a bit of shock, but more linked to only being at school for two days in term 1 and then the fire happening. We put a focus on our mental health and making sure everyone was settled and comfortable in that space. 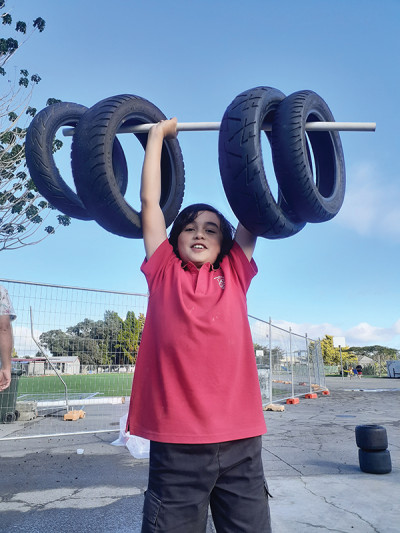 Reuben found a good use for some tyres and a length of pole.

“We ended up going into team teaching scenarios when most of our classes are single cell. But the teachers and support staff all banded together. We upped all our support staff hours to full time if they were available, just to make sure we had all hands-on deck. Parents were great and we all made it work.

“The Council and community came on board. The Ministry of Education provided buses – it became a kind of four-week camp with lots of opportunities to go and do things that we wouldn’t normally do. Traditional reading, writing and maths looked a bit different for those few weeks, but it was a matter of getting through it and making sure everyone was safe and happy and functioning.”

Simon says tamariki were brilliant in the school environment but “a handful of parents told us there were meltdowns happening at home and there wouldn’t normally be.”

He adds they brought in Ministry psychologists for parents to talk to, and that their in-school social worker made sure he was around and touched base with kids.

Apanui School’s 10 remaining classrooms were deep-cleaned, and the site cleared by early March, when a tsunami warning on the east coast saw the community head to the hills.

Simon says the tsunami evacuation was just a further ‘spanner in the works’, and one day later than planned, the remaining 10 classrooms were back in use.
Te Whare Wānanga o Awanuiārangi owns a former hotel and conference centre next to the school, the Ministry leased the space and there are now five classes in the building and four Portacoms on the site.

“We’ve put a hole in the fence and there’s a path – kids and staff come back on site for breaks and to do PE. This is now our home for the next 18 months.”

“We see learning through play as the best thing for our kids – a way of supporting reading, writing and maths as well as supporting their social development. It provides an easier transition for kids into school.

“When we started, we had a group of kids coming into school with poor oral language. We looked around at what we could do differently and being able to use their language through play became an obvious solution and we built on it from there. 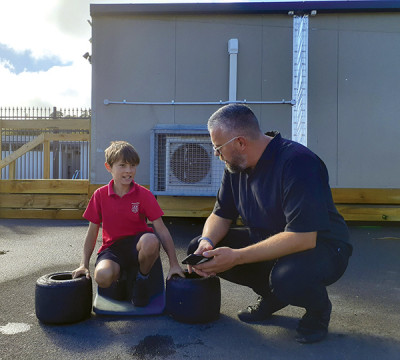 Rob Stevenson from Longworth Education has a kōrero with Hamish (Year 5).

“We feed it right through the school now, so we’re working on what it looks like up the school for older kids because it obviously looks different for them.”

The school has two shipping containers full of loose parts for self-directed open-ended play. With things lost in the fire, Simon was thrilled when Sport Waitākere, hearing about the disaster from Longworth Education gifted the school a Magic
Play Box.

Longworth Education had been working with the school previously to help them implement play-based learning. Sport Bay of Plenty was on hand to deliver the box and get tamariki started.

“The fire certainly put a bit of a challenge into how we’re going to operate this year, with the resources disappearing and all the bits and pieces teachers build up over time,” says Simon.

“The Magic Play Box was great because it just helped us rebuild some of those resources. The kids were absolutely fizzing – they love it. It’s been integrated into our play, given it a new little boost and helped to build that resource for the school,” he explains.

Simon says that his teachers are highly skilled at observing children at play and building that into provocations and opportunities to extend their learning.

“A big part of the play is making sure teachers are out in the play because it’s easy to be sitting in the classroom but then you’re not observing their urges and what the children are engaged in. The teachers bring that back into the classroom to integrate with the maths, writing and reading where possible.” 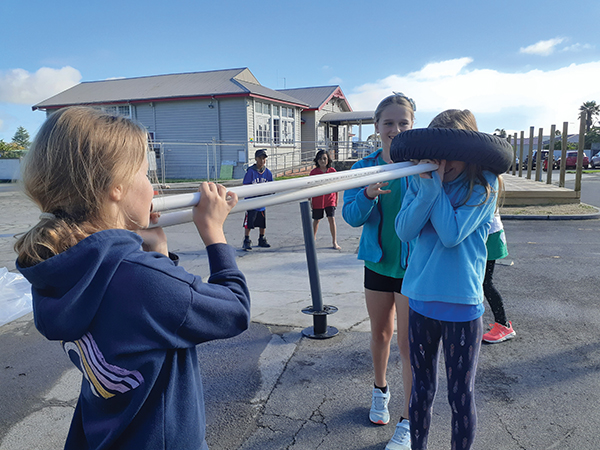 Water play is popular with tamariki at the school and provides many social and learning opportunities.

“They can build in language around fractions for older kids. The skill of the teacher is in building that curriculum language with the children,” explains Simon.

Water play provides an opportunity for older children to learn and play with younger children at the school.

“We look to mix up the ages of the kids too,” he says. “Lots of our older boys need that water play and things that younger kids freely do. Learning through water play removes that barrier around older kids feeling they are babies playing with bubbles and doing water play.

“When we mix up the 10-year-olds with the

five-year-olds, the play just flows beautifully. They’re learning off each other and they are great role models for our younger kids. It removes that stigma of ‘playing with water when you’re 10’.” 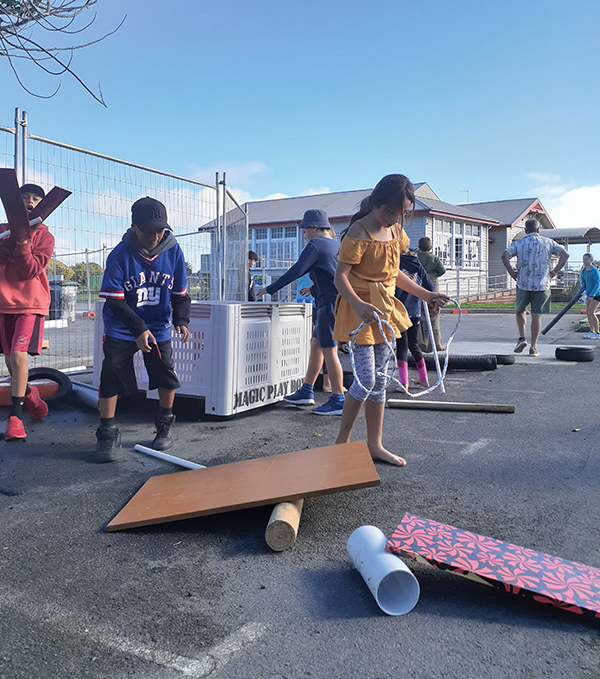 Learning through structured play is a big part of the kaupapa at Apanui School.

In a rough year, Apanui School’s approach to learning through structured play has helped the school community get back on its feet.

“While we were at the War Memorial Hall, we provided what we could around the play in terms of resourcing and opportunities, but then when we filtered back into school, it was huge.

“The kids were familiar with it, it allowed them to settle. We think it really helped with that transition back into school because it became something that they knew and an outlet for them to express themselves,” says Simon.

He says that a large part of learning through play is the development of social skills along with problem-solving. “Our teachers have the skills to build that into their learning and it’s also a way to get the kids to express themselves and work through the fire.

“We just want to thank all of the schools, colleagues and classes who have supported us in so many ways since the fire. The support and love has proved that, first and foremost, schools are about the people,” he adds.

Education Gazette visited Apanui School prior to the fire. Watch the video to see how the school worked with its Kāhui Ako to improve attendance and engagement across its community.