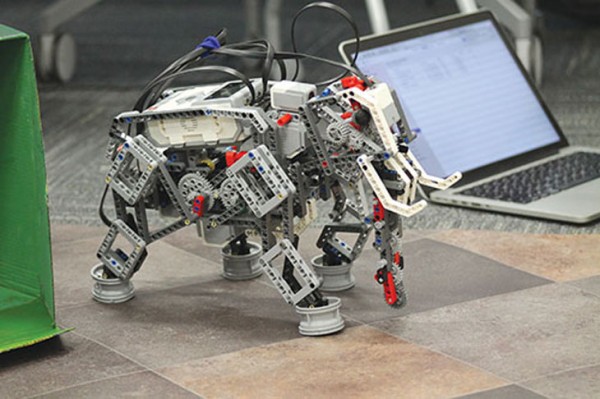 Not many people likely think of robotics as a sport, but according to Jill Pears of Sumner School and Kathleen Langman of Hillcrest High School, if you were at either the Waikato regional finals, or the Canterbury equivalent, you would have had your mind changed for you. The competition was intense, say both teachers, because robotics is such an engaging field for students of any age.

“It’s a subject that students seem to get quite passionate about; lots of them get very emotionally attached to their robots”, says Jill.

There are three competition areas that make up RoboCup Junior: theatre, rescue, and soccer. In the theatre division, robot contestants ‘act’ on stage to a sound track; rescue is something like an obstacle course, where robots follow a map; and soccer pits two teams of engineers and robot footballers against each other.

Before the competition proper can begin though, all the teams are interviewed by a panel of experts. Kathleen says this is primarily to gauge what sort of understanding students have of the processes they’ve gone through in creating their robot gladiators: it’s all about the learning and the doing, not the complexity of the finished product, says Kathleen.

Kathleen put her hand up to organise the Waikato region’s RoboCup Junior regional finals. As it’s the first time the competition has been held in the area, there were only a few entries, but Kathleen believes that’s the best way to go about creating momentum around RoboCup and robotics in general: start small and build.

The youngest entrant at the Waikato event was in fact Kathleen’s daughter, who teamed up with her 10-year old big sister to enter the robot theatre competition. Their automatons acted out a dialogue between a scientist and assistant, for which they created the soundtrack themselves.

Though the competition is open to any kind of robot, almost all of the entries at the Waikato event were based on Lego’s Mindstorms platform, which Kathleen also uses in her classroom. She says it’s the ideal introduction to robotics and programming, but that it also unleashes creativity thanks to Lego’s strength as a modular construction medium.

“We’ve got 10 [Mindstorms kits] at our school, which we use in the classroom. You can build according to the instructions, or you can put together your own design – Lego is really powerful like that, as it’s so modular.

“The kitsets have a ‘brain’, which you can plug into a computer, and then you either write your own simple programmes or download them.”

The value of failure

Jill Pears is an associate principal at Sumner School, and organised this year’s Christchurch Robocup regional finals. This year, the teams she worked with in class concentrated on the theatre section of the competition, and used robots to re-tell fairy tales. Jill says that newcomers commonly underestimate the level of creativity that’s crucial to robotics: the reality, she says, is that robotic thinking won’t produce a great robot, at least when innovative responses to a given challenge are called for. In fact, the range of skills that pursuing a robotics project can help nurture would surprise many, she says.

“We’re talking about the ‘other’ things, like problem solving, creativity, collaboration, as well as character-building skills like developing persistence and resilience, and managing emotions.

“There are a lot of factors that can cause your robot to not work. For example, your programming might be perfectly correct on the computer, but as soon as you download the programme onto the robot, it may not necessarily work.

“For example, if you’re using a light sensor, there might be bright light coming in through a window, or somebody might walk past and cast a shadow, and cause the robot to do something unanticipated.

“It’s really instructive for kids, in things like teaching them the value of redundancy, and trying to foresee potential hazards, trialling a variety of different strategies.”

Both Kathleen and Jill say that robotics is also a great way to get kids thinking about the best way to compromise and mediate within a team, especially given the way so many students get so personally invested in their robot project. When something achieves the level of engagement that both teachers see in students participating in RoboCup, passions can run high: everybody thinks their idea is the winning ticket; yet all voices must be heard. Jill says that often, the fact that student groups are able to see past their own agendas in favour of the group means they’re learning something about how the world of their futures will work.

“It’s a great way to develop a bit of tolerance too: for example, a student might have their idea, which they think is best. But they’ve still got to give everybody’s ideas some air time, even though they might think they’re a bit rubbish.

“Often, when it comes to deciding on a direction as a team, they choose a compilation of all their individual strategies, which is a great outcome as far as I’m concerned. It’s great to see kids coming to the conclusion that many brains working together is a lot stronger than one brain working on its own.

“The funny thing is that it seems the more challenging a robotics problem is, the more the kids get engaged, because they are driven to find a solution. Sometimes the solution is really very hard to find; it’s never the first solution they come up with. That means that the kids are experiencing the value of failure, if you like, learning to learn from unfeasible solutions. It’s a great way to get kids to see that failure is a positive step toward success. When the desire to make something work is so strong, as it often is in robotics, kids will try again and again, so it really develops some determination I think.”

‘Computational thinking’ and ‘design thinking’ are buzz-phrases that get a lot of airplay in education these days: plenty of commentators have said that this mode of thought – involving disassembling a problem into its constituent parts, identifying variables, coming up with algorithmic solutions, and other diverse skills that have their origin in the study of computer science – is ‘the’ key 21st century skill.

Given that robotics obviously embodies these logic and creativity skills – as well as giving them a real world expression – parents, teachers and everyone in modern education should look to the subject as an unbeatably engaging learning context, says Jill.

“There’s a bit of a movement these days toward teaching aspects of computational thinking in schools. All those concepts are really embedded in robotics, so it’s the perfect vehicle to investigate such things as networking, design thinking and process.”

That leads Jill to share her thoughts on the prominent role that coding – a skill that is clearly crucial to the study of robotics – should be given in the future of education. Jill is not, it seems, given to breathlessly unqualified statement though: she says that unless it’s used as a cross-curricular skill rather than as a stand-alone discipline, it’s no good to anyone.

“Coding helps to develop thinking skills, it’s that simple. Problem solving, design thinking: that is all developed through coding. That needs to be embedded into a lot of different subject areas.

“My thoughts are that it’s an essential part of the curriculum, but as teachers know, there’s so much to teach that, if we make something else essential to learning, it’s going to create pressures.

At Hillcrest High, Kathleen teaches robotics at year 10 level. She says that it’s a great theme to apply across the broader technology curriculum, and that as a subject it fits nicely with the technology achievement objectives, especially where systems and modelling are concerned.

The process she leads students through in class closely models the concepts of computational thinking.

“We start by identifying the problem that needs to be solved. We watch videos of robot competition entries, and then we get together in teams. Sometimes I’ll give them a built robot, depending on time restrictions, other times I’ll say ‘right, you have to build this to meet the entry requirements.’ So, if it’s to be entered in the rescue section of the competition, it has to be able to move up a ramp, it has to be nice and stable, be able to go around corners, and things like that. If the student’s entry is for the theatre section, it may need to look like a person, so it might need moving arms for example.

“We then investigate some basic programming skills, using the Mindstorm Software. It’s a great platform, because it utilises all the same concepts that any programming software uses. If they’ve learned programming before, they’re able to transfer the knowledge; if they haven’t then it’s great as a grounding.

“Then we allow heaps of time for trial and error. My classroom component of the RoboCup competition lasts about six weeks.”

Jill Pears speaks glowingly of this year’s Canterbury edition of RoboCup Junior, held with the key contribution of a venue from Christchurch Polytechnic Institute of Technology (CPIT). She believes the competition will continue to go from strength to strength.

“What we’re seeing year on year, is that people are building on ideas from previous years, either their own or those of other teams.

“It was so wonderful to see so many people engaged, and to see the level of support and encouragement from parents. Many wouldn’t think of robotics as a sport, but we had lots of people on the side lines, cheering for their team, which was great. It’s a really nice environment to be in.”

What was the most challenging part of preparing for RoboCup?

“It was really hard making up dance moves and planning without even having a robot.
We had to ask a lot of people for help in buying our robots and we only got them at the
start of the term.”

How did you come up with your ideas?

“We had an idea based on a movie, song or programme we all knew. Then we looked through YouTube.”

How did you find working together?

“A little bit challenging at times; one person wanted one idea and another person had a different view. There was a lot of debating.”

How did the performance go on the day?

“It started off not very good but it did get better.”
“Arms fell off and leads were not connected properly.”

What would you do differently next time?

“Practice more.”
“Check equipment.”
“Spend more time with the program and the robots.”

How did you feel about what you achieved?

“Really happy that we got to perform and that we got somewhere.”
“I liked it because it worked out in the end.”

The Ministry of Education’s Connected Learning Advisory is committed to supporting schools as they plan for and use digital technologies for learning.

Innovative Learning Environments: have you had your say?

The shape of the classroom is changing – in new and redeveloped school buildings new types of spaces are appearing that offer different ways of learning.

The Ministry of Education’s Connected Learning Advisory is committed to supporting schools as they plan for and use digital technologies for learning. Read more

Innovative Learning Environments: have you had your say?

The shape of the classroom is changing – in new and redeveloped school buildings new types of spaces are appearing that offer different ways of learning.
Read more

Faculty of Education and Social Work

Online Teacher of Spanish and French