Business is booming for the student enterprises that took out the top three awards in last year’s The Lion Foundation Young Enterprise Scheme (YES) – and the learning opportunities have been priceless. 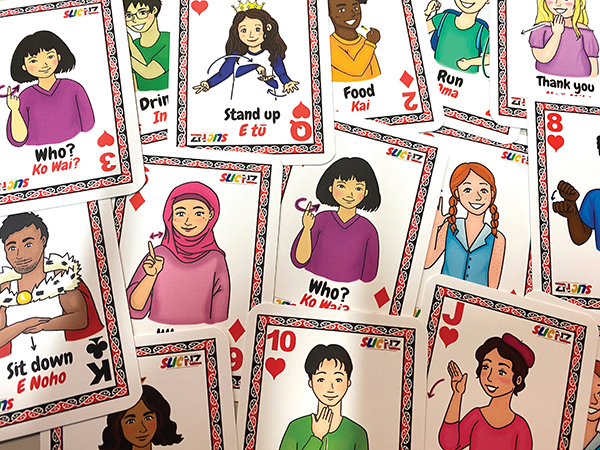 SLIC is an interactive card game which aims to encourage more Kiwis to use New Zealand Sign Language.

Four out of the six Year 13 students involved in SLIC NZ are now studying business at university. David Dunlop, head of business studies at Pakuranga College, says this wouldn’t have been on the radar for at least two of the students, who took business studies for the first time in Year 13, and loved it.

It’s the fourth year David had teams enter the competition, which attracts entries from more than 4,500 students each year.

“We do business studies at Levels 1, 2, and 3, and it’s only at Level 3 that you join the Young Enterprise Scheme for a year, you enter a team in the competition, and you do the challenges. We keep it in the back pocket to provide a bit more impetus at Level 3, and they give it a really good crack,” says David.

He says encouraging six or seven teams in a classroom is a big role for the teacher, and it’s a big ask for students as well.

“It’s hard because these kids have to create and run their own start-up business in less than 12 months – it’s very difficult to do.” 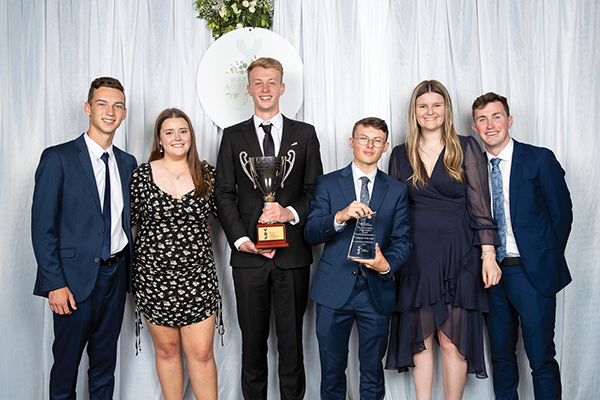 The SLIC NZ team are continuing to run the business, have recently got a trademark and are launching an alphabet pack using sign language. CEO Ned Verrall says calendars and posters are also in the pipeline.

“Their heads are in the right place. They want to grow the brand and get more Kiwis using New Zealand Sign Language, which I think is a fantastic mission statement. The team’s reason for the business is very genuine – they want to support their community.

“If these kids want to achieve the sorts of things that the Young Enterprise Scheme sets them up to achieve, they really have to go out there on their own, self-direct themselves, figure out what needs to be done and essentially learn on the go and learn from those mistakes.

“The biggest benefit would be the personal growth – the incidental, organic growth that they go on through running a business – and having the mindset of trying to do well with it,” says David. 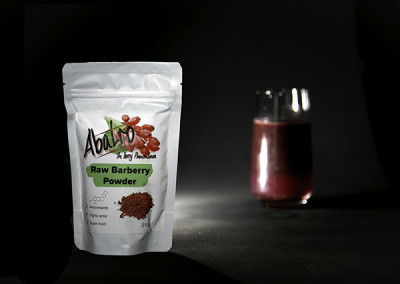 Abalro is made from dried barberries.

Helping young people deal with acne led a Year 12 group of Bayfield High School students to research and source a natural product, which studies show can considerably relieve the problem. Abalro Health won second place in the YES competition with their dehydrated product made from barberries.

“We’re all teenagers, and we all suffer from acne ourselves, and Alex, our production director, has done some research about barberries which studies have found can relieve acne by about 43 per cent in a single month. He tried to buy it in New Zealand but couldn’t, so when we came along to the Young Enterprise Scheme, we decided that we could be the first people to introduce it to the market, so here we are now!” says CEO Robert Donohoe.

“We import the barberries from Iran, then dehydrate them and crush them into a powder – our consumers prefer it in a powder form because then it’s easy to add to smoothies, yoghurt, muesli.

“It’s been really educational for all of us about the challenges of international importing, and now exporting as well. It has been very interesting, and we have learnt a lot more about the technical side of running a business,” he says. 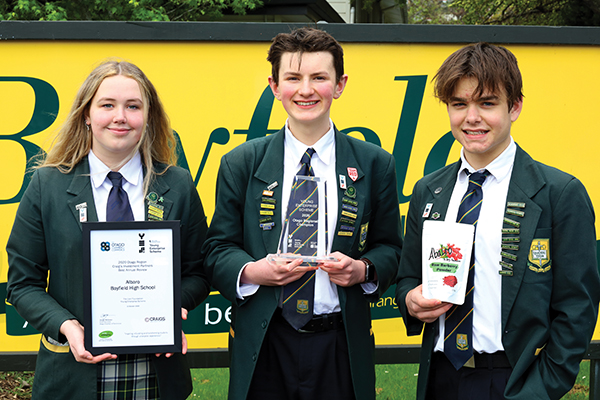 The three students in the Abalro team are now in Year 13, with two of them planning to study business at university, and Robert interested in studying medicine. With growing demand, some production of Abalro, which is now stocked in 18 retail stores nationwide, has been contracted out.

Abalro Health is one of five YES businesses competing for a place at Expo 2020 in Dubai in 2022. The team is part of the second cohort of the Global Kaitiakitanga Project, an initiative developed in partnership with New Zealand at Expo 2020, culminating in a ‘Dragon’s Den’ style pitch in September. The programme aims to develop the participants into global citizens, participating in the global economy through New Zealand’s unique lens of kaitiakitanga.

And does the product work?

“YES! University studies have shown that barberries can relieve acne by up to 43 per cent in the first month of use; we found similar results for our product. It’s been incredibly useful for the three of us, and we’ve had very positive feedback from lots of our customers, with some people saying it’s the best product they’ve ever used,” says Robert. 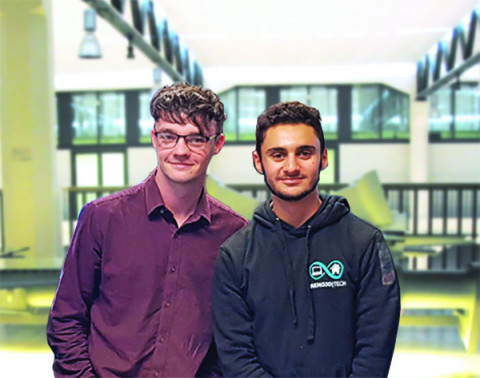 Remojo Tech from Aotea College came third in the YES competition. Their involvement in Recycle a Device, a social enterprise that aims to address digital inequity and gender disparity, build skills and create opportunities for fellow students, was featured in Issue 4 (external link)Education Gazette: RAD: Computer recycling scheme makes a difference(external link). To date, Remojo Tech has worked with dozens of students nationwide training them to repair and refurbish more than 100 devices, with an aim to put over 2,000 laptops in the hands of students in 2021.

“We’re keen to continue our involvement in the tech and social enterprise sectors – namely through Remojo Tech, which will continue to be a member of Recycle a Device (RAD); providing training to schools throughout 2021 and beyond,” Hadi Daoud, told Education Gazette.

The founders of Remojo Tech are currently at university studying a mixture of commerce and computer science, hoping to continue their contributions to the tech equity space.

To find out more about the three winning companies, check out their websites:

Pipeline into business and enterprise

The Young Enterprise Trust has been around for about 40 years, and its objective hasn’t changed: to ignite curiosity and an entrepreneurial spirit among students throughout Aotearoa.

With a variety of programmes, Young Enterprise works with 85 per cent of secondary schools.

Young Enterprise is focused on creating a more prosperous New Zealand through enterprise, and works with schools across the country to help students learn about business and entrepreneurship. It begins with resources for teachers at the primary and junior secondary level. Then there’s the BP Business Challenge, a rangatahi challenge for Year 10 and 11 students, and a teen parent unit challenge.

The Lion Foundation Young Enterprise Scheme is a business experience programme where senior high school students run a real business. Each year, 21 companies make it to the national final.

“We describe ourselves as a pipeline into the business ecosystem,” says Jessikah Cresswell, alumni programme manager.

“Recently, it’s become much more apparent that your soft skills are really important – what they call employability skills. Things you may not learn in the classroom, like communication and resilience, are really important for people, not just for entrepreneurs. But no matter what path they take, we think they are better prepared to thrive in business and life,” she says.

It takes grit and dedication to reach the regional finals, says Jessikah.

“We’ve identified that regional winners have done one of two things, if not both. They have executed their business well or have an innovative product.

“YES is quite accessible to most students because they can do a range of business ventures from simple to complex, but they get the same learning from what they’re doing. They don’t have to be the most innovative, future-forward ideas; it’s about what they learn and take from that experience.
Many entrepreneurs have many failed attempts before they find success, so for some students, YES is about failing forward – they are already on that pathway,” explains Jessikah.

With the Young Enterprise Scheme attracting more than 4,000 students (more than 1,000 YES companies) in recent years, it became apparent that support needed to go beyond YES. The Trust’s alumni programme has been going from strength to strength.

“We have quite a big alumni programme. We have students who do the programme and love it so much, they want to stay engaged. They volunteer with us and may mentor current students because they want to see that students are getting the same value.”

A Young Enterprise survey found that over 40 years, YES has been producing entrepreneurs with at least 263 companies created, of which 160 are still active. These companies have created between 2,700–4,600 jobs.

An alumni survey found that 85 per cent of participants said they would recommend YES to other students and 69 per cent said the programme positively influenced their
decision-making process after school.

For more information about Young Enterprise(external link) visit there website.

Two students from Manurewa High School have nailed the chance to kickstart their careers in trades with scholarships from a construction management company.

Two students from Manurewa High School have nailed the chance to kickstart their careers in trades with scholarships from a construction management company. Read more

Recognising and Responding to Child Abuse and Neglect - WEBINAR

Early learning / kōhanga reo, Kindergarten teacher,
Full time, Fixed term, Start Date: 14/02/2022, End Date: 21/12/2022 (Covering for a staff member who has been seconded to another Kindergarten for this period.)