A relatively simple initiative focused on improving transitions has had a big impact on building connections with whānau at a special character school in Lower Hutt. 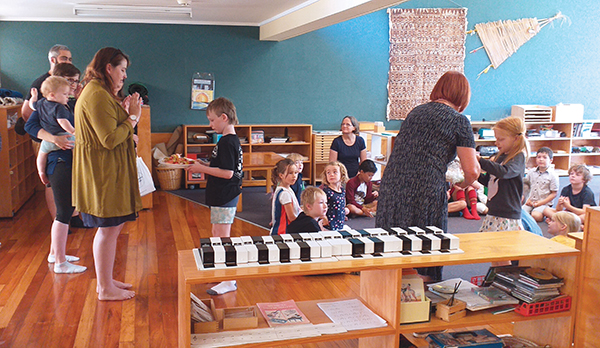 Tamariki and their whānau share kai with their new class community.

Like other Montessori schools, Wā Ora splits learning into three-year levels, starting with a playgroup for children under three, a pre-school for three- to six-year-olds, and an area school for children from six to 18, made up of four sectors.

Krista, who teaches in the pre-school, based her inquiry on looking at how they were welcoming new children into the pre-school and then transitioning tamariki up to the primary school, and then on to the high school. She was inspired by an idea shared by another Montessori centre through Ngā haerenga, a Montessori Aotearoa New Zealand (MANZ) platform for sharing ideas and good practice.

“Strengthening biculturalism throughout Montessori services and schools has been a focus of our community for many years.”

With biculturalism a key focus of Krista’s inquiry, she and her colleagues set out to explore ways they could improve their current processes.

“We had good systems in place for tamariki being settled into the classroom, but not necessarily for their whānau,” says Krista.

“With the primary school facing the pre-school building, the transitions are typically easy for children, but we didn’t acknowledge that it is also a special moment for their whānau, not just for tamariki. Moving up to the high school (on a separate site up the road) is also a milestone that we acknowledged could be more of a celebration.”

With support and encouragement from the senior leadership team, and after many staff discussions, the teachers tentatively gauged their ideas with the school’s whānau group – a group of parents and whānau with children who identify as Māori. They wanted to see if there was support for involving whānau in a special transition from preschool to primary to high school, and to seek advice on tikanga Māori and following correct protocol.

There was great support for the idea; the whānau group members were keen to celebrate every stage of transition across the school. They wanted to mark the important milestones and be part of their children’s journeys through the school. 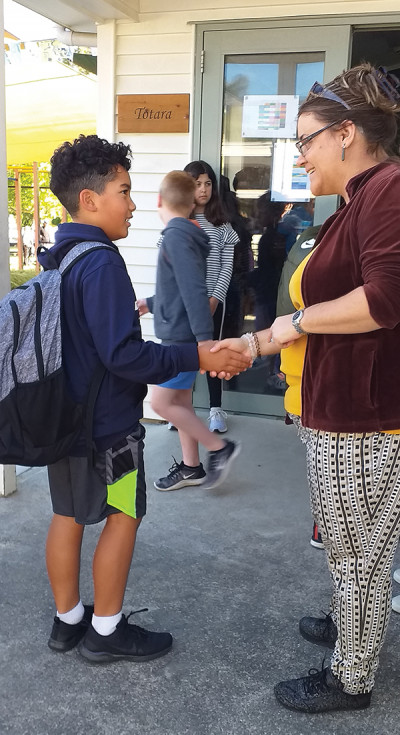 A new student stands proud during his transition to primary.

Each transition was marked in a slightly different way, according to the age group, but all ceremonies shared a focus on connecting with whānau.

Welcoming new tamariki into the preschool previously involved the child and their family visiting at the end of the school day. This year, new children are welcomed into the class 15 minutes before the class ends and greeted by children and teachers in te reo Māori.

“The new whānau get to hear the children introduce themselves and immediately they feel part of the class. That sense of belonging is there from the first moment they arrive, rather than having to be built up,” says Krista.

The transition to primary school is marked by a ceremony involving a whaikōrero, welcoming tamariki to the next level of the school. This format is followed for transitions into the subsequent levels within the school.

“We had assumed the teachers would lead the whaikōrero, but the response from the whānau hui was, ‘Wouldn’t it be great if the tamariki led the whaikōrero?’.”

The siblings worked with their whānau in Hastings to come up with a whaikōrero that was half a page long, says Krista.

“It was a really powerful moment for them to stand up and kōrero in front of a whole group of people and their whānau.”

Elise was pleased to have an important role. “I was really nervous, but I enjoyed doing it, and it made me feel really good,” she says.

The girls’ mother, Anna Tapine, says she is delighted to see a genuine commitment to making te ao Māori a regular part of the school and the Montessori character. She applauds the transition initiative.

“It has provided great opportunities for tamariki to whaikōrero in te reo Māori that did not exist previously. Our whānau are proud to be a part of it and look forward to the continuation of this.”

High school student Jachin-Arepa was also involved with the transition ceremony. “I was very nervous before I started but felt relaxed afterwards and was glad I was able to do this for the school.”

Rod, parent to a student from the high school, was moved by the experience.

“As a parent I was proud to see my son taking the next step on his educational and leadership journey. To see a shy boy who wouldn’t have dreamed to do anything like this twelve months prior, to get up and speak in front of his peers, teachers and the community to deliver a welcome speech to the new cohort of students and their whānau showed real leadership in this space and using te reo Māori was key. I am aware that for many adults public speaking is not easy, let alone for a 13-year-old young man to do what he did, and conducting this in front of his peers and strangers is not an easy task for anyone. This whole experience I believe was the biggest learning for my son.”

Every child transitioning was supported by at least one person there from their whānau, says Krista. After the whaikōrero, whānau were invited into the classes to share kai.

“Feedback from the teachers is that it was great to share that very first moment with whānau in that space of community.” 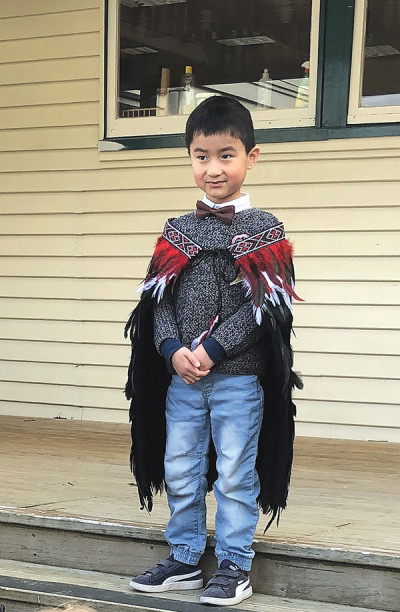 A nine-year-old is welcomed to his new akomanga at the end of the mihi whakatau.

The school is now in the process of gathering feedback from whānau, learners and teachers, but they have heard only good things to date.

“Feedback so far from whānau has been that it was such a special moment for them. There were a few tears in the eyes,” says Krista.

The aim now is to build on the enhanced connection with whānau brought about by the transition initiative, with the hope of increasing engagement on a day-to-day basis. Learning stories will be a good way to see if there is increased engagement in the pre-school context, suggests Krista.

One of the key takeaways for Krista is to not let a fear of getting it wrong get in the way of putting a well-intentioned idea into action.

“Our whānau hui were very supportive. Initially we were thinking, ‘Is this the right thing to do?’ and ‘What order should we do things in?’,  she says.

“But the fact that we were trying and wanting to incorporate this as part of our school was huge for whānau. The fact that we were giving real opportunities for tamariki to experience Māori culture and use te reo in purposeful ways – that meant more to them than getting everything absolutely correct.

“The actual transition ceremonies only took about 15 minutes, but it meant so much. It’s a good reminder that it’s ok to start small; that it’s the intention to do something that makes a difference.”

Wā Ora Montessori School gives an insight into the detail of their new transition celebrations at two levels of the school.

Navigating the transition from primary to intermediate

An important transition in a student’s life is that between primary and intermediate school. At Willow Park School in Northcote, teachers have been fine-tuning

Navigating the transition from primary to intermediate

An important transition in a student’s life is that between primary and intermediate school. At Willow Park School in Northcote, teachers have been fine-tuning Read more