Pandemic no match for Pacific pride

Pacific festivals are not only a riot of colour, sound and taste, they also serve as anchors tethering Pacific learners to that all-important sense of belonging. The recent cancellation of Polyfest, due to the COVID-19 outbreak, only served to reinforce the significance of cultural festivals to Pacific students and their families and communities.

When rangatahi at Auckland Girls’ Grammar received news that Polyfest, New Zealand’s biggest schools’ cultural event had been cancelled, so many tears were shed that some joked the school lawn would no longer need watering.

The school had a whopping 400 students, more than 40 percent of the roll, ready to perform at the nation’s flagship cultural event, and each of them had spent up to 20 hours a week in rehearsals since the start of the school year.

“The girls’ families had tried to prepare them for the possibility of Polyfest being cancelled, but there were a lot of tears,” says Lily Stowers, teacher-in-charge of the school’s Tongan group and cultural groups’ co-ordinator.

Lily has the formidable task of managing relationships between students, staff and parents involved with the groups representing Māori, Tonga, Samoa, Fiji, Cook Islands, Niue, India and the Philippines. 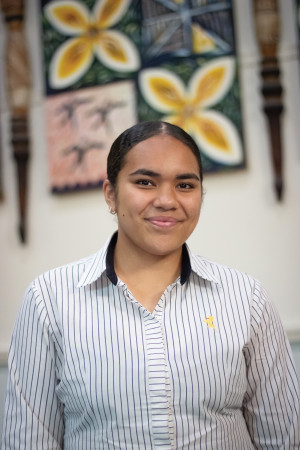 “I really felt for our seniors, our Year 13s, as their performances were cancelled last year (after the events of March 15), but I was so proud  I was so proud of how they took the news. They were able to understand that it was about staying safe and helping their nanas and older family members to stay safe.”

Fijian group leader Mere Aria, 17, says that it’s not just the excitement of getting on stage and the crowd cheering that I love, it’s the feeling of being able to perform and being proud of their culture.

“Outside of the school and Pacific events, I feel that people judge us, that we can’t do well because we’re Pasifika females, but here and at Polyfest we feel supported by everyone, we are at home.

“Last week I went to an international women’s dinner. One of the women I met was a senior teacher at another Auckland high school and the way she spoke to me left me feeling very judged, as if I couldn’t do well because of my ethnicity and where I go to school. But when I’m at my school and involved with my cultural group, I can be proud to be myself, I don’t have to be someone else.”

Groups open to everyone

Mere says that being involved in cultural groups helps her achieve in her schoolwork too because most of her subjects – classical studies, history, dance and English – are about relating back to her culture.

There are 18 students in Mere’s cultural group, some Fijian, others Samoan, Chinese and Indian.

“It’s open to everyone, it’s a way for me to share my culture with other girls and keep in touch with my own culture. I want Fijian students to know that just because we’re a smaller group compared to the rest, that shouldn’t silence or stop us from expressing our culture, in fact that’s an even bigger reason for us to be louder.

“When you’re from another culture and you’re living in a Pākehā community, the Pākehā way is dominant and you start to lose yourself a bit. 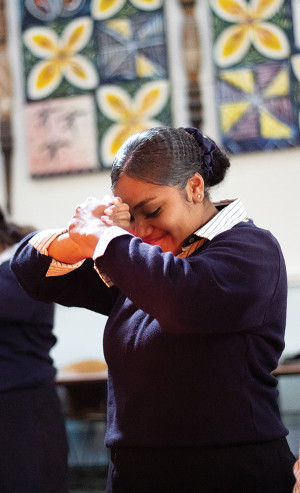 “When we first left Fiji, we lived in Christchurch and for the most part the people there were lovely, but it was very white compared to back home. When we moved to South Auckland, I started to see more Islander kids, more brown kids, and that inspired me to express my culture more. I liked it more, I could relate to them in a way I hadn’t been able to with Pākehā kids. I could be myself and the Pasifika group became the thing I looked forward to most at school.

“It feels special, my family gets involved, helping me to get costumes and items together and my mum comes with me to weekend practice. My family helped me work out the dance, the music and the costumes; one of my uncles did the choreography and my mum’s aunty sewed the costumes.”

Most of the students at Auckland Girls’ are, in their own words, brown. The dominant ethnicities are Māori and Samoan – 23 percent each – Tongan (16 percent), Niuean, Indian (six percent each), Cook Islands Māori and South East Asian at five percent each.

Studies indicate that for Pacific students, identity (language and culture) is central to learning. According to the Pasifika Education Plan 2013, schools need to explore educational achievement through a cultural lens that sees Pacific knowledge and practices as valid and valued and not solely as a means to achieving desired school outcomes.

“Participation in Pasifika activities – customs, practices and language – builds young people’s sense of self-esteem, belonging and wellbeing, and gives them confidence to connect to school and out-of-school activities, including education.” 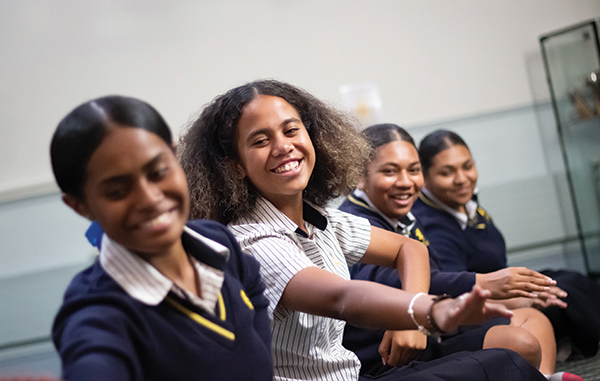 At Auckland Girls’ Grammar, the cultural groups are key to building relationships with families, says Junior Manapori, teacher in charge of the Cook Islands group.

“We’ve got good parents in all our groups who come to support our girls week to week because of the relationships Lily has with the groups and leaders. Without that connection, you’d have parents who weren’t supporting the school.

“We also do supper after practice and parents’ meetings to help build those connections. If you don’t have a cultural group for a body of students, then you have a population who don’t have their culture represented at school.”

Students learn to appreciate their own and others’ cultures. For New Zealand-born Pacific learners, this is especially important, says Junior.

“There are non-Cook Islands-born students who know nothing about their culture. In group they learn the dance, the singing, the hymns and how it relates to society today. They learn the protocols such as why in our church women wear hats, or that what you wear during hymns is different to what you wear for a drum dance. We learn the protocols for funerals and events so as they move on in their lives they know what to do.” 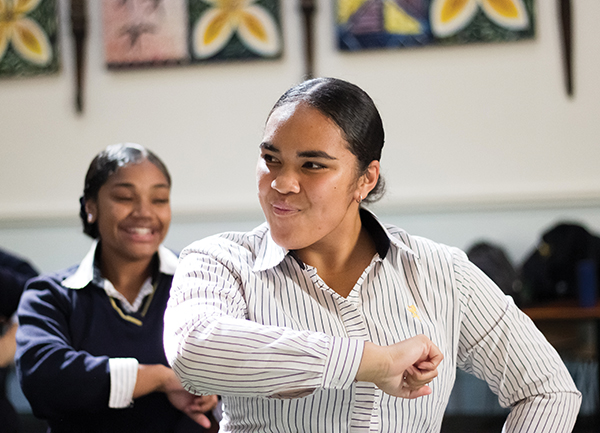 Studies indicate that for Pacific students, identity (language and culture) is central to learning.

Students gain knowledge and a sense of pride in who they are, they feel connected and empowered.

“Many girls join the group after language week celebrations. We acknowledge all the language weeks and it seems to bridge a gap, students hear their language celebrated and make the leap to the cultural group. They find their home within the school.” 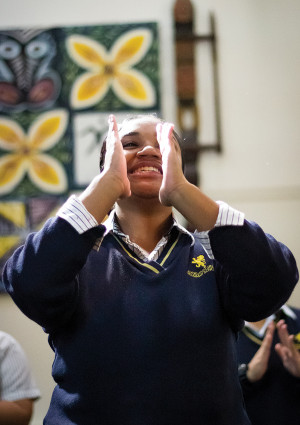 “Polyfest is the highlight of the year for me. I’m pretty sad right now but there’s always next year.

“I’ve made this commitment because I love my culture and being able to share it with a whole crowd is amazing.

The best part is the journey, then all of that hard work and sweat paying off when you perform on the stage. I feel happiness, and at the festival there’s a great sense of community and pride in my school, especially because the Tongan group holds the title.

“Polyfest is the highlight of the year for me. I’m pretty sad right now but there’s always next year,” says Bene’t.