Over a century in education sector for Sisters

Both now in their eighties, Sister Valerie Lawson QSO (formerly Sister Mary Celine) and Sister Pauline Leonard CNZM each have over 50 years’ experience teaching and leading in the education sector, an apt story for Education Gazette’s centenary. 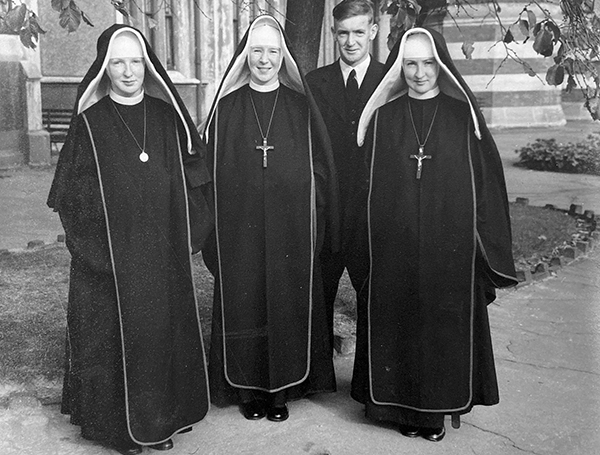 Valerie decided she wanted to become a teacher during her primary school years in Christchurch.

Inspired and encouraged by her teachers to become a Mission Sister as well as a teacher, she attended a Mission Sisters’ small, residential preparatory school in Cashmere, Christchurch, for students considering becoming a sister.

“I don’t regret the decision to attend it, but in hindsight it had some drawbacks,” reflects Valerie. “We were a very small and isolated group and very protected, so we didn’t have the opportunity to mix with many other young people of our own age. However, the benefits we received certainly outweighed any negatives.”

In 1951, at the age of 19, Valerie entered the Novitiate of the Sisters of the Mission in Christchurch.

For about two and a half years, Valerie received what she describes as spiritual training, as opposed to teacher training. Then in August 1953, she was ‘professed’ as Sister Mary Celine and took the formal vows of poverty, chastity, and obedience.

After profession, it was straight into the classroom at St Joseph’s Primary School in Christchurch, where Valerie taught “30 wonderful, clever children in Primer 3 and 4”. Just two years later she was appointed to Sacred Heart College in Christchurch.

“Having only a short experience of primary school teaching and my highest qualification being University Entrance, I was suddenly a terrified secondary teacher. We didn’t know what we didn’t know! A lot of preparation went on the night before the next day’s classes, but I was fortunate to have mentors during this time from whom I learnt a lot – and fast!” 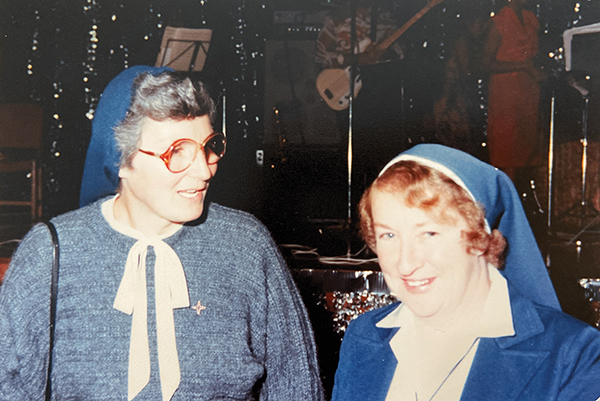 ‘A jack of all trades’

While teaching full time, Valerie studied after school and attended lectures at the University of Canterbury, eventually graduating with a BA in English.

After nine years at Sacred Heart in Christchurch, Valerie moved to the Mission Sisters’ Sacred Heart College in Lower Hutt for three years. By now a seasoned teacher, she taught a wide variety of subjects to different class levels as the expectation was for every teacher to be a ‘jack of all trades’.

Sister Valerie’s leadership journey began in 1967, as principal of Redwood College in Nelson. The school – a five-storey building – served as both a school and convent, where the sisters lived.

“At a class reunion in 2018 of students now in their 60s, the women spoke very highly of their experiences at the school, believing they could do anything. They were rewarding years and I still have connections with many of them.”

In 1980, Valerie became principal of Lower Hutt’s Sacred Heart College, where she led the school until her retirement in 2000. In her first year there, the college became the first Catholic secondary school to be integrated into the state system.

“It was a very difficult year but if Catholic schools hadn’t integrated, they would have folded. That’s how dire it had become because there were fewer Sisters teaching and because we received very little, we couldn’t afford to pay other staff.”

There was some state aid before integration, but integration was a real lifeline, albeit requiring a considerable restructure.

Positions of responsibility had been few and far between. Valerie explains, “We had principals and deputy principals but as far as possible they were Sisters and didn’t cost more!”

Previously, Catholic schools were reliant on fees and often they weren’t paid.

“Eleven of the Lawson girls went to Sacred Heart College in Christchurch, but fees weren’t paid for any of us. Many families were in that position – if you couldn’t pay fees, you didn’t.”

Fees are still charged for capital works (new buildings), as the Government does not supply these, however the inability to pay them does not exclude students.

Valerie says they put a lot of emphasis on the achievement of Māori and Polynesian students at Sacred Heart College.

“We were also lucky to have excellent full-time te reo Māori teachers and Māori culture was a feature of our school – and that was in the 1980s!

“As a teacher, you have to like teenagers and believe they can be better than they realise; you must have high expectations and believe in youth, and that belief will be catching.”

For many years, Sacred Heart College has had the greatest number of students taking part in the Duke of Edinburgh’s Awards Scheme. Most years, Valerie went to Government House supporting students receiving their Gold Awards and in 1995, when she herself received the Companion of the Queen’s Service Order for Public Service to Education, she recalls the Governor General Dame Cath Tizard saying, “It’s good to be giving you one too!”

A framed print sits in Valerie’s lounge with the adage “to teach is to touch a life forever”. For Valerie, it sums up teaching.

“Teaching is a rewarding vocation and you need good people in it, but it takes a lot of commitment. As unmarried sisters, we could give 100 per cent of our time, which was easier than for others who had to raise families and still did a wonderful job.

“Very satisfying to me was to see disadvantaged kids become confident people, equipped to go out and live and not have to continue with that disadvantage.”

The thing that pleases Valerie the most is past students telling her they left Redwood and Sacred Heart Colleges thinking they could do anything.

“We lived in a ‘girls can do anything’ age! I’ve never lost the inspiration I received from Mother Dominica, my best secondary school teacher.”

Three of Valerie’s 11 sisters also joined the RNDM (Religieuses de Notre Dame Missions/Sisters of Our Lady of the Missions) and had careers in education: Sister Lorraine Lawson, Literacy Learning Specialist/Teacher at St Patrick’s in Auckland; the late Sister Maureen Lawson, principal of St Joseph’s School in Nelson until her retirement in 2000 – the last Mission Sister to teach there; and the late Sister Bernadette Lawson, who taught at Sacred Heart Primary School in Petone before succumbing to leukaemia in 1959 aged 28.

Valerie’s brother Kevin also became a teacher and taught in Australia. And many of the next generation are also pursuing careers in education.

One of five girls in a Catholic family, Sister Pauline was raised in Christchurch, participating in many activities associated with the church. Teaching was looked upon as a good career option, and at secondary school Pauline had various Sisters who were role models and influential in her decision to join the congregation of Sisters in Ferry Road in Christchurch.

She took her formal vows in 1961 and her first assignment was for three years, teaching Primer 3 and 4 in Nelson.

“It was challenging teaching children who were at very different levels, especially with 30-plus children in the class,” she recollects.

“One year I had this young boy who had learning difficulties. He loved music but he didn’t speak, and he occasionally did anti-social things like throwing other children’s shoes over the fence. I’d never encountered a situation like this and seeking advice was tricky because we didn’t have a lot of outside contacts. Thankfully, I was able to talk to a lady on the staff about ways to cope.

“Throughout my career, there weren’t many children with learning difficulties. In fact, when both Valerie and I were teaching, far fewer children presented with these.

“Generally, young people came to school ready to learn. There were still difficult home lives and families with addiction issues, but we expected certain behaviours and we had high expectations of every child.” 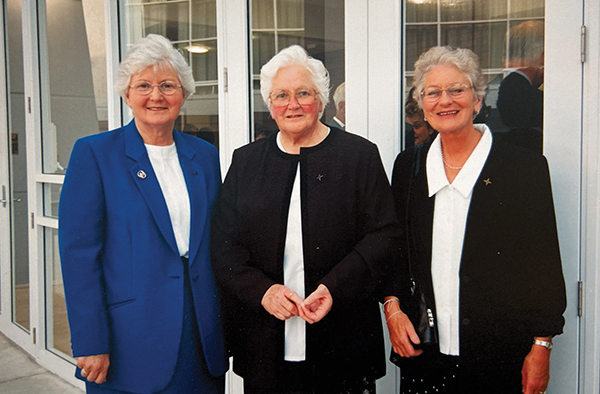 High expectations of learning were certainly role modelled by Sister Pauline. While teaching in Nelson, Sister Pauline did her Level 1, 2 and 3 Teachers Certificate papers, completing five in the first year and subsequently the others.

“After completing the papers, you could apply for an inspection, where you were observed teaching. It was then decided if you got your Teachers C or not.”

Pauline achieved this at Sacred Heart Addington Convent and Primary School in Christchurch.

She also studied at university- her first paper was geography. “Geography wasn’t so much a choice, rather a subject that was available outside of school hours,” she says.

In 1964, Pauline went to St Joseph’s in Christchurch where she co-taught with a Sister in the Novitiate, Annemarie Shine, who was a trained teacher.

“She used to replace me in the classroom while I did Chemistry at university because Chemistry was only available during school hours. That arrangement held for the next three years and then I had a full year where I studied Zoology with Honours.”

After nine years in that position, Pauline was appointed principal of Sacred Heart College in Hamilton.

“When I got there, all I knew about how to be a principal was what I had learned from Valerie.”

Sister Pauline has fond memories of her 14 years leading Sacred Heart College, during which she oversaw major curriculum developments, an increased roll and the growth of a positive, energetic learning environment.

As she told seventh formers at one of the leaving functions: ‘You came to Sacred Heart with your youthfulness, inexperience, and childhood dreams – and you have grown through these five years and now leave our college as friends and confident young women’.

Sister Pauline remembers sitting for an oil canvas painting by Joan McKenzie to be hung in the Creative Arts Centre. The Centre is named after Sister Pauline, the last RNDM principal at the school.

In 1996, Pauline was awarded a Woolf Fisher Scholarship. Valerie took a term off to accompany her, and the Sisters visited schools in Boston, San Francisco and New York, as well as attending a Catholic Education Conference, the size of which blew them away.

“On the way home, we went to South Africa and visited a school where they were making clothing by hand. We came home and fundraised and sent the school several sewing machines.

“Through education, we’ve have had a range of wonderful experiences,” reflects Sister Pauline. 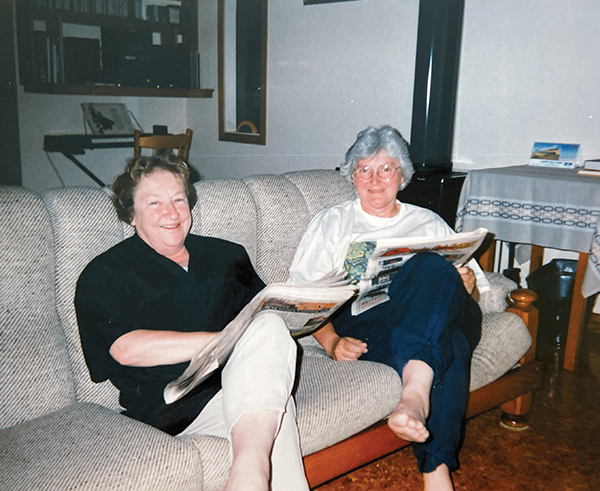 Upon retiring, both Sisters were involved from 2004 to 2010 in the leadership of the RNDM Congregation in New Zealand, which includes the Samoan congregation.

Keen sportswomen, the sisters are now avid watchers and armchair referees of rugby, cricket and netball in particular. They remain involved in many family and congregation activities.

Both Sisters have made an immense contribution to education and, though retired for many years, their passion remains for a bright future for young people through building their confidence, contributing to their educational achievement and ensuring they leave school with a good heart.

Sister Valerie’s niece Tania Black works for the Ministry of Education and has shared this story with Gazette readers.

Sisters of Our Lady of the Missions

1861 – 1893 Euphrasie Barbier founded the Sisters of Our Lady of the Missions Religieuses de Notre Dame des Missions in Lyon, France.

1951 Sister Mary Celine enters the Sisters of Our Lady of the Missions at age 19.

1995 Sister Valerie Madeline Lawson honoured as a Companion of the Queens Service Order for Public Service.

1959 Sister Pauline Leonard enters the Sisters of Our Lady of the Missions at age 19.

2003 Sister Pauline Anne Leonard honoured as a Companion of the New Zealand Order of Merit for services to education.