Kaiako and ākonga in Waikato are getting muddy as part of a child-led, open-ended programme that aims to develop STEM learning. 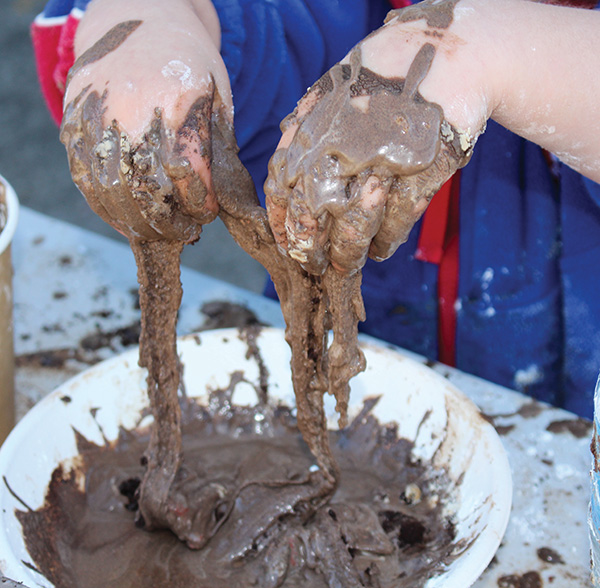 Ākonga enjoy learning about, and playing with natural resources like sand, soil and water, which means a lot of mud!

“Teachers can be limited by time and resources to be curious, experimental or explorative. The spontaneous and chaotic messiness of child-led play doesn’t fit, and when play is offered in schools, it is often restricted to inside ‘clean’ activities,” she says.

The programme has run in four schools since it began last year and Naomi says the number of children reluctant to get their hands dirty or lacking basic knowledge learned through water play – like submerging an empty bottle in a bucket of water to fill it up – is “phenomenal”.

“We’re taking the adult voice out of play. It all happens outside, and includes playing with natural resources like sand, soil and water – that means a lot of mud!

“Most importantly, allowing children to make their own decisions around social and physical risk-taking enables them to become curious and wonder, in their own time.” 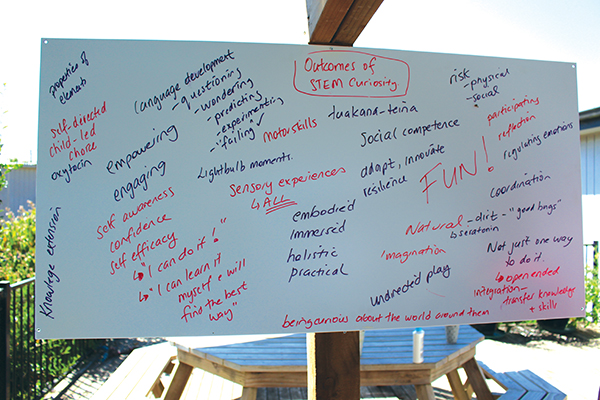 Maria Persson is a Year 0–1 kaiako at St Columba’s Catholic School in Hamilton with a keen interest in learning through play.

“It allows children to be a lot more ‘hands on’ and gives them the ability to express, navigate, cooperate and collaborate with others while developing their language and their essential skills,” she says.

Last July, she and principal Gareth Duncan engaged with STEM Curiosity after seeing an alignment in the programme’s ethos, philosophy, pedagogy and what they believed their tamariki needed.

“In learning through play, it’s essential that as a teacher you observe, listen, take in and note where children may need some scaffolding or some support to be able to instigate deeper thinking,” says Maria.

The programme is structured to support play-based learning by making the teachers participants in the play.

“As teachers we tend to direct the learning, but we were reminded on and off through the course of the event to sit back, actually play ourselves and allow the kids to question us.”

Naomi and co-founder Tara McAuley brought along and set up the resources, which included tables for various bowls of mud, sand, cornflour, coffee grounds, water and utensils.

“It’s very much child-led at their pace,” says Tara. “We say right at the start that it’s about them and they can join in how they want to, and if they’re feeling uncomfortable to take a step back and just watch.” 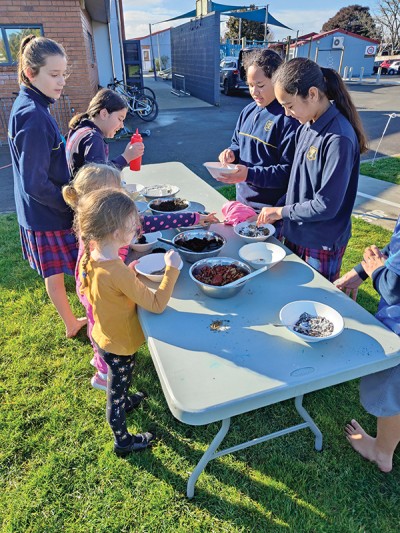 She says some choose to stay in their own space doing their own thing, others join in as part of a group. Those who want to keep their hands clean can choose to mix with a spoon. However, Tara says many decide to get their hands dirty by the end of the session.

“That’s really powerful for them because they spend so much of their time being told what to do by adults, not just teachers and parents but extracurricular activities are often very structured as well.

“That absolute freedom to just play and do their pace is quite a powerful experience for them,” says Tara.

During the St Columba’s session, Maria says most children immediately began experimenting and communicating between each other, and those who were more apprehensive about getting dirty could engage at their own level of comfort.

“Growing their curiosity in itself is quite important.”

She says a student who is germaphobic was inspired to engage in the messy play by watching their classmates.

“I put mud and cornflour all over my face, which helped him to engage a bit more,” Maria adds.

Naomi and Tara, meanwhile, involved themselves by walking between the tables asking the children open-ended questions and making observations about the learning that was occurring without interfering in any play.

Working within the curriculum

Through her own research, Maria has learned there are various areas of The New Zealand Curriculum that can be applied through learning through play.

She says the programme sits well under the ‘Exploration Play’ umbrella of learning. 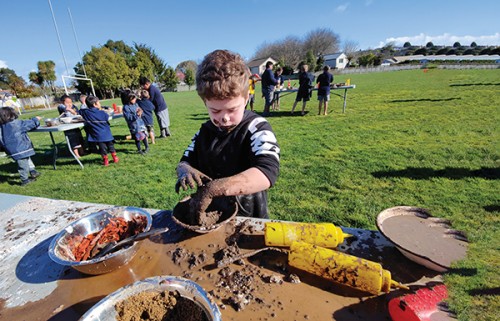 Messy play allows children to be a lot more hands on in their learning, and explore their curiosity.

“If we were to take it to the next level, we would help tamariki to engage with concepts that they really wanted to know more about by providing scaffolding and additional resources, including time, to support the learning.

“Following the self-led experience, the classroom work could involve exploring the properties of something else like soda and how it interacts with other liquids to take it to that next level of thinking scientifically. Children could decide what they might want to use.”

She has also used the experience as a prompt for writing but stresses that teaching and learning does not always need a curriculum objective.

Rather, teachers should make sure it’s covered by bringing experiences back into the learning in the classroom, she says.

“It’s more about giving the students lots of opportunities, experiences and ways of thinking, then putting the responsibility and ownership back on the educator to know the curriculums – our local curriculum or marau-a-kura, The New Zealand Curriculum, Te Marautanga o Aotearoa and Te Whāriki.

How to get involved

Email stemcuriositynz@gmail.com to get in touch, or visit their Facebook(external link) page. 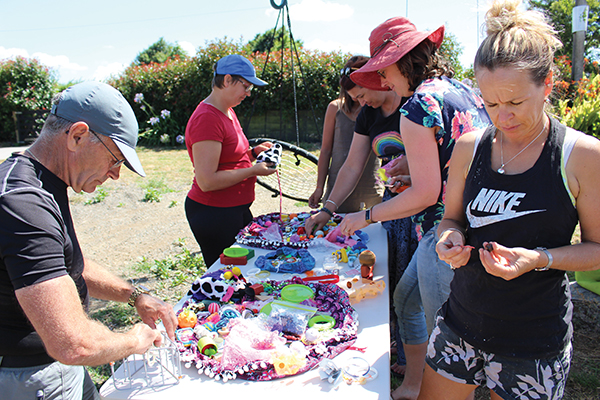 Jason Wilcox, head of Guitar and Commercial Music at St Peter’s, Cambridge, is also a professional musician who shares his knowledge with his music students.

Jason Wilcox, head of Guitar and Commercial Music at St Peter’s, Cambridge, is also a professional musician who shares his knowledge with his music students. Read more

Help to create Aotearoa's next generation of carbon literate ambassadors