Matariki lends itself to mātauranga Māori and te taiao learning opportunities across the curriculum and it is also a key opportunity to strengthen connections with whānau and the wider community. 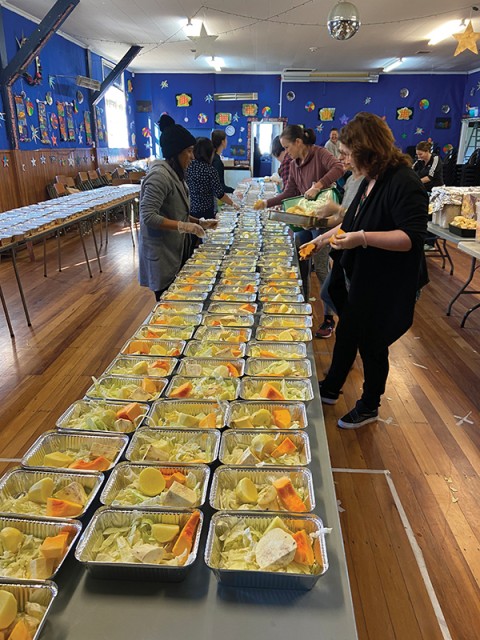 Matariki festivities at Miramar North School last year culminated in a hāngī and sit-down dinner for 250 people, a huge undertaking for the school of 246 students. It was such a success that it is now a fixture on the school’s calendar.

“I can’t describe what it felt like in the hall with all the families sitting together eating,” says kaiako Sarah Macintosh. “We were buzzing. Like all schools, we have a little group of people who go on all the trips and do all the parent help, but this particular event brought in people who cannot make it to many school events.

They came in, they helped and everyone ate together. It was fantastic.”

Planning began three months before the event and involved asking for help from whānau, requesting kai donations from local suppliers, a flier drop around the neighbourhood and advertising on local Facebook pages.

“It was huge work for our home and school group who did all the organising but when it came to the actual doing of everything, we had a lot of volunteers.”

Sarah and her husband James Tawhiri (Ngāi Tahu and Ngāti Kahungunu ki Wairarapa) are seasoned organisers of hāngī so they managed the cooking logistics with help from 25 whānau across two days.

“The day before the celebration, we had helpers come in to dig the hāngī pit and to defrost meat and make stuffing, then the next day we had an army of helpers who turned up at 7am with peelers and chopping boards.”

For ease of distribution, food was apportioned into separate packs before being cooked.

The hāngī fire was lit at 7am, the food put down at midday, and the event kicked off at 2pm with kapa haka and an explanation of what Matariki means. Afterwards, whānau joined their tamariki at wānanga: raranga/flax weaving led by a student’s kuia/grandmother; taonga pūoro/traditional musical instruments led by an outside expert; and pot plant painting and planting for which pots and seeds had been donated.

Everyone left with something they had woven, a kōauau instrument, or a painted pot with seeds planted, says Sarah.

“When it was time to lift the food, everyone gathered round the hāngī pit and our boys did a haka. Then we handed out the packs. The school hall had been decorated with the children’s star art and we had tables and chairs laid out for everyone to sit together. There was such an awesome feeling of community and togetherness.” 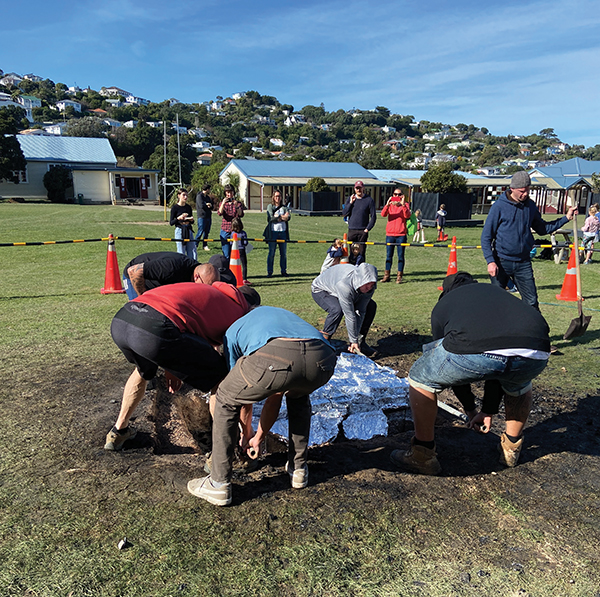 The school had a lot of support from whānau to put down a hāngī for the wider school community.

Staff were happily surprised by the attendance of people with no connection to the school, and delighted by the feedback – “A great community event”, “The hāngī was delicious”, “The wānanga were really interesting, I love my star I made”.

“Our school is quite hidden, you can’t actually see it from the road so unless your children attend or you use our swimming pool, you wouldn’t know we were here. Because we had advertised, we had a lot of people coming who had not been on school grounds before.”

There was huge interest in the hāngī. “Our school is situated very close to Weta Workshop so we have a lot of families from overseas who are unfamiliar with our traditions. This event gave them the opportunity to be part of, or even just watch the process of, a hāngī, something you don’t get to do very often.”

As well as food for the crowds in the hall, a further 100 packs were distributed for takeaway, for example to rugby clubs and businesses.

Sarah’s enthusiasm for te ao Māori is such that she has written a book about Waitangi, Journey to Waitangi.

“This book came about when my family and I had a camping holiday in Northland. We planned to spend a day at the Waitangi Treaty Grounds but we were so moved by our experience that we ended up staying for two days.

“My daughter, Brianna (Ngāi Tahu and Ngāti Kahungunu ki Wairarapa), felt so connected to her Māori culture and learnt so much about the events surrounding the signing of the treaty that she wrote to Jacinda Ardern asking her to make it possible for all school students to have the opportunity to visit the Treaty Grounds.

“After seeing Brianna’s reaction in Waitangi, I was inspired to write a book from her point of view. It includes the family being on a camping holiday as this is something many New Zealand families do in summer.” 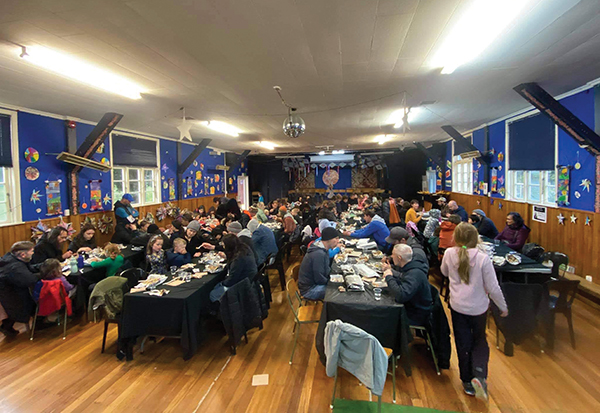 Matariki a village affair in Warrington

Far south, at Warrington School north of Dunedin, reflecting on Matariki is also a community affair.

In a tradition now in its 14th year, the school is strung with fairy lights and lanterns, and each child is issued with a paper lantern before they leave school at 3pm. Around 200 people from the village of 800 join ākonga for the annual lantern parade which culminates on the school grounds.Afterwards, everyone gathers in the classrooms to share kai.

“There is soup that the children have made using ingredients from our veggie garden and everyone brings a plate,” says kaiako Jacqueline Burt.

Matariki learning at the school revolves around the māra. The children learn to harvest and can help themselves to produce from the garden which was established many years ago by two local women, Lyn Hastie and Lyne Carlisle. Lyn and Lyne spend every Thursday working with ākonga in both the garden and kitchen.

Tamariki take turns to plant, harvest and cook, and have a say in what they want to plant and where.

“They do the mulching and the weeding, and they choose which vegetables to plant,” says Jacqueline. “For the juniors, time in the garden is mostly fun but as they move through the school, they gain a really good understanding of the cycle from germination to planting seeds, maintenance and harvest. They definitely understand how it all relates to Matariki in terms of what is visible in the sky and new beginnings.”

Ākonga also make soup to take away on camp and make fruit and vegetables into chutneys which they sell, ploughing all profit back into the māra. 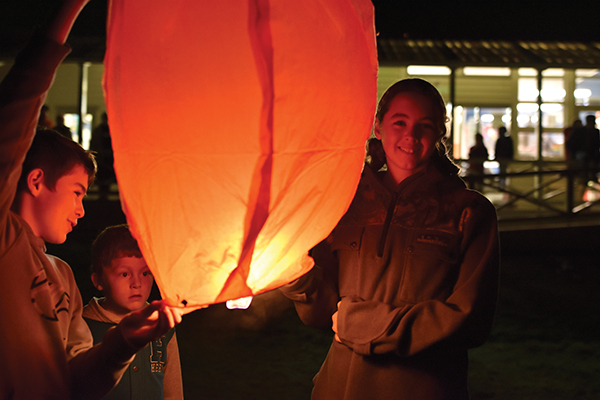 The annual lantern parade is a highlight for ākonga at Warrington School.

Ways to reflect on Matariki

Matariki is a special time for communities in Aotearoa New Zealand. It’s about remembering those who have passed, taking time to reflect, and setting goals for the future. It’s also an important time to do something good for te taiao.

Read more about these themes at matariki.net.nz/about.(external link)

Engage with your community

Host a dawn breakfast or evening meal for your local community to reflect on Matariki together. Encourage your students to get involved in the design and organisation of the event and honour those special people in your communities who have passed.

Tree planting or mahi in the school māra are ways to explore the connection between Matariki and te taiao. You could also organise beach and land clean-ups, or consider how you might improve recycling and reduce your waste output.

Broaden your knowledge of Matariki

Explore some of the mātauranga and pūrākau associated with Matariki and describe some of the ways that Matariki is observed and how this varies between the regions and iwi of Aotearoa New Zealand.

There are 51 new Matariki resources to support your teaching and learning this year. Visit kauwhatareo.govt.nz(external link) to explore which ones you can use in your classrooms.

Connect with local iwi and hapū

Watch out for further details and learn more at tearawhiti.govt.nz/funding-for-matariki-celebrations.(external link) 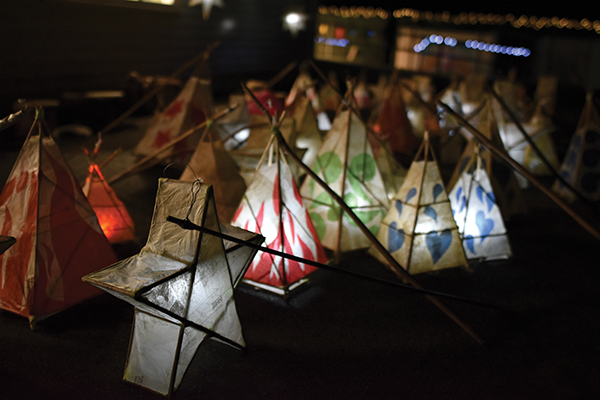 Each lantern has been handmade by former teacher aide Mireka Van Looy who returns each year to repair them.