Matariki is providing creative learning opportunities for students at St Mary’s College in Wellington, including an exhibition of Matariki-inspired corsets made by ākonga, which will be displayed at the National Library of New Zealand in July. 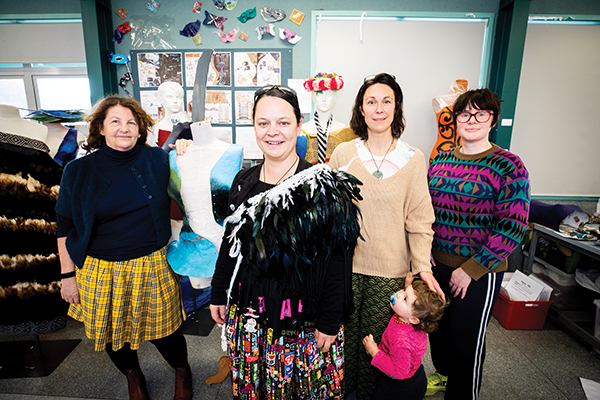 Matariki celebrations keep getting bigger and bigger at St Mary’s College, a Catholic secondary school in Thorndon, as teaching staff look at culturally responsive ways to engage students in the annual event.

The Matariki corset project is in its third year and Nan Walden (Te-Aitanga-a-Mahaaki), head of creative technologies, is thrilled that this year, some of the best garments were to be exhibited at the National Library. In June, National Library curators judged 30 entries from three classes of Year 10s – with a selection of the best becoming part of an exhibition, Hato Marie – Te Auaha.

“The National Library has been really amazing in this,” says Nan. “They’ve got exhibitions down there: He Tohu with Te Tiriti o Waitangi, Declaration of Independence and the signatures of the suffragettes. The girls visited these exhibitions and also Mīharo Wonder, 100 years of Alexander Turnbull Library, and they have taken inspiration from all of that and put it into their corsets.”

Digital technology students have made ‘Marvellous Matariki’ movies, which will be used in school-wide celebrations to be held in July. The languages department will also be running a multilingual QR code ‘Amazing Race’.

For the teachers involved, it’s vital that all of the activities are culturally responsive, while framed by a Te Ao Māori lens.

“About 50 percent of our student population are Pacific or Māori, but the other 50 percent are made up of Pākehā and many other ethnicities. So the girls get to bring all of their cultures to the Matariki corset project,” explains Nan.

She says being able to show diversity and cultural responsiveness is more than putting posters on the wall featuring te reo Māori and Māori whakataukī (proverbs).

“It’s not until you actually bring it into the project and make it the project that we are honoring Te Ao Māori as the first culture. If we have a Te Ao Māori lens, we can bring to it what other cultures represent as well. What’s good for Māori, is good for everybody here,” explains Nan.

Julia Scarf’s Year 10 design technology class is also taking part in the Matariki corset challenge. She says that a culturally responsive lens allows students to bring their cultures, backgrounds and life experiences to the project.

“I think one of the exciting things is that all of the girls can be exactly who they are – they do a lot of research about how they can incorporate these things and they come up with these ideas and I basically say ‘go for it’. 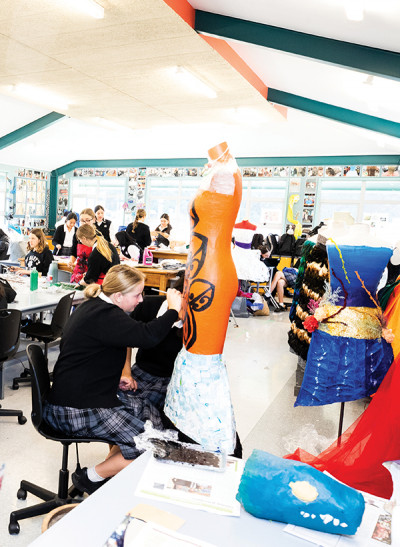 “It’s like taking different muses. The students might take the inspiration or muses of te reo Māori, Matariki and superwomen and combine these ideas to make a Wahine Toa corset with shooting stars coming out of the shoulders!” explains Julia.

Head of languages at the school, Amélie Kelder, is Belgian and says that for the past three years, the languages department has focused on creating a multi-cultural Matariki event.

“We wanted to see the perspective of each culture for Matariki because it’s a special time of the year across the continents. For example, Japanese people celebrate Tanabata (Star Festival). In Belgium and France, we have a music festival and the Fire of St Jean at the end of June,” she explains.

Amélie goes on to say that Matariki represents harvesting, new birth and the resilience of those people who navigated across oceans using the stars.

“I’m an immigrant so I know that if we can show the diversity and multiple faces of one event –it’s really allowing them to celebrate who they are and what they want to do. That’s why my department does something different every year – and every year it’s bigger.”

Samoan, Japanese, French and te reo Māori are taught at St Mary’s College and the languages department will be running some multi-cultural events for the school’s own Matariki celebrations on 28 July, which will include crafts from different cultures.

The language department will also be collaborating with digital technology to organise a multilingual Amazing Race, says Amélie.

“At the beginning of the year, for Year 9 orientation, there was a QR code ‘Amazing Race’ for the girls to learn about the school. We’re going to re-use the template of the QR system, but all the questions will be in a target language. Working as a team, they’re going to have to understand those questions which are based on Matariki. The target is to celebrate Matariki but using digital technology, opening the culture and celebrating all the subjects in one big game,” she explains.

Tessa Moxey, teacher-in-charge of food technology, says that catering for the opening of the National Library exhibition provided a valuable opportunity for her students.

“For Matariki, they will be basing the food around the seven stars – which all have a food group attached to them – but they will interpret that themselves. We will try to have a Māori flavour to the food,” she says.

“Last year we made cupcakes with stars on them and this year we’re still coming up with ideas,” says Esther, Year 11.

“We started writing a timeline on preparation for the recipes and for when we’ll be making the food beforehand. We’re practising with a Pacifika fono night,” she says.

Tessa says the annual Matariki event is like glue that binds the whole project together.

“As a Pākehā teacher, I think that what’s good for Māori is good for everyone. We can’t have an education system that has different outcomes for different students.

“When projects like this happen in different classroom spaces, the students are less resistant to Te Ao Māori because it’s seen in every classroom, it’s a whole-school event. Maybe four or five years ago there might have been more pushback from some non-Māori students,” says Tessa.

Ten years ago, Nan says she did not speak te reo Māori but she now is asked to do karakia and whaikōrero (formal speeches).

“As a country we’re on a journey and it’s amazing how far we’ve come. It’s about being allowed to shine and to lead. As a wahine toa, a Māori woman, and a teacher in a school, I get to set the example for my Māori students.

“That’s been a journey for me as well – being a leader and honouring my tipuna and connecting with my whakapapa has been so amazing for my artistic journey – and for my student’s artistic journeys. It raises Māori achievement,” she says.

Ākonga at St Mary’s are engaged in, and love, the annual Matariki events and Nan says they are a ‘good marketing tool’ for technology subjects.

“I have a very future-focused vision for the technology department here,” says Nan.

“So many people still talk about the ‘sewing room’ and the ‘cooking space’, but actually it’s the creative technology space and the girls have agency over what they make, whether it be architecture, furniture, korowai, or wearable art.”

She says the school’s vision for creative technologies is to produce future- focused women with digital skills.

“We’re producing young women that want to go into trades, who want to be builders, we’re producing engineers, digital programmers and fashion designers. We are doing it all in here,” explains Nan.

The exhibition at the National Library will be held from 6-23 July and then the corsets will become the centrepiece of the school’s own Matariki week at the end of July. 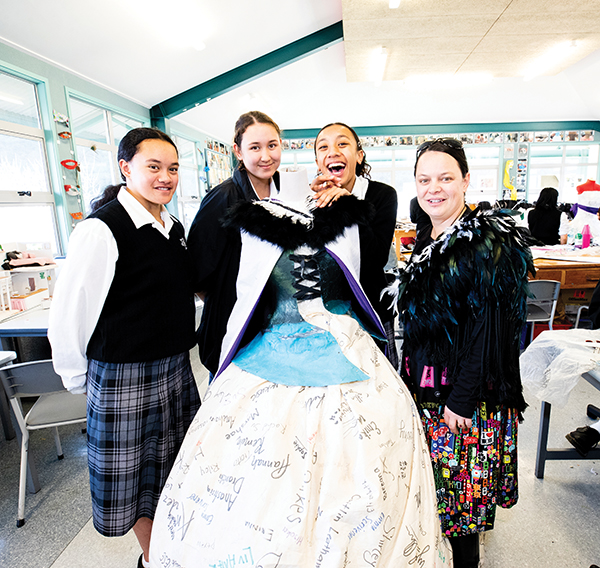 Shayla, Bella, Tyra and Nan with the ‘Ode to the Suffragettes’ piece. Nan is wearing a feather korowai she made. It is called ‘Pikihoro’ and pays tribute to her marae, Takipu in Te Karaka.

Ode to the Suffragettes

Year 10 design technology students Tyrah, Shayla and Bella have used a range of historical and cultural elements in their corset, skirt and korowai. The full papier-mâché skirt, which sits on a hooped crinoline was inspired by seeing the signatures of the suffragettes at He Tohu.

Over a two-week period, St Mary’s students were invited to add their signatures to coffee-stained cotton fabric used to make the skirt. – referencing the foremothers who signed the early petition to gain votes for women.

The Matariki corset was inspired by a painting from 1900 in the Mīharo Wonder exhibition that shows early European settlers on a log bridge.

Nan notes that she is still learning about tikanga Māori and that a korowai is defined as a traditional Māori cloak made from traditionally sourced materials and traditional techniques.

“All other cloaks will be referred to as contemporary korowai to honor our Māori traditions and weavers,” she explains in a disclaimer.

Tyra is Samoan and says that she incorporated a little Polynesian culture in the design.

“One thing I enjoyed while doing the corsets was that I was able to express my creativity and ideas. Even though it’s based around Matariki, you can make any kind of corset that you really want.
The first idea was making a nature-inspired corset, but that was quite complicated so we tried to change it a bit more and make it more Matariki.

“The final idea was the women suffrage idea. I also do art and was able to incorporate all of my art skills and techniques on the corset. Putting a painting on the corset is a really nice idea,” she says.

Shayla, who has a Cook Island Māori background, says she didn’t feel she brought her culture into the project, but the two cultures are quite close.

She found that making mistakes was valuable.

“One thing I enjoyed about making our corset was actually making mistakes, because every mistake we have made produced something that was better than our previous idea,” she says.

“I have learnt patience, how to papier-mâché, how to dry brush and how to sew on lots of different things in different ways,” she says.

Nan says the girls’ project honours those women who fought for future generations to be able to vote. It also represents the Matariki concept of resilience and rebirth.

“We talk at length about the Suffragette movement and how we got the vote – that was a kind of oppression.

“I also really enjoy that part about it being rebirth. As an oppressed people we are now being able to shine and it’s amazing that Matariki represents this. We are awoken as people and are shining and knowing that we can shine. Not hiding behind my white skin has allowed everybody around me to do that as well,” adds Nan.

Mōhiotanga through the call of taonga puoro

In partnership with Ngāti Kauwhata, Feilding High School has given ākonga the opportunity to delve deeper into the history and mōhiotanga/knowledge

Mōhiotanga through the call of taonga puoro

In partnership with Ngāti Kauwhata, Feilding High School has given ākonga the opportunity to delve deeper into the history and mōhiotanga/knowledge Read more