Te Whiwhinga The Imaginarium at Auckland Museum is sparking delight and curiosity among its many visitors – children and adults alike. 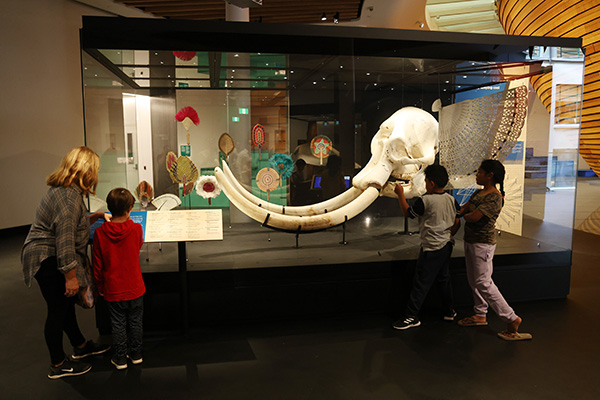 Visitors experience the themes of ahu-tanga (connections) in one of the four large hero cases showing a bush elephant’s skull at Te Whiwhinga The Imaginarium.

Under themes of whakapapa, place, story and function, Te Whiwhinga The Imaginarium presents objects that share unexpected or unusual connections, using large-scale and dramatic displays to ignite the imagination and begin the learning journey.

Learning manager Matthew Crumpton says it soon became apparent that the learning programme’s main point of difference is that children can have tactile engagement with special taonga, treasures and objects.

“For us, the best way to build knowledge is to first get children to wonder, discover, observe and really get immersed in that learning,” he explains.

“We are confident that our point of difference is accessibility to these treasures and objects. If you look at our learning model, we believe that the most effective way of learning is hands-on play, investigation and discovery in a tactile way.”

First stop at Te Whiwhinga The Imaginarium is the ‘Learning Base’ with four hero displays showcasing four objects, including a full-sized African bush elephant skull with tusks, and a full-sized leatherback turtle shell.

“The kids come in here first and are awed straight away. The bush elephant skull is surrounded by Pasifika fans and then there are two metal fans that sit where the ears would be. So, the children are making connections – that the elephant would use his ears for cooling, as we would use fans for cooling,” says Matthew.

“Children bring their own prior experiences and knowledge to making connections that we’ve never even thought about. It’s in our best practice model: activating them as learners and holders of knowledge.”

Alongside the hundreds of taonga, Matthew says the greatest resource at the museum is the team of learning specialists who are a combination of teachers, scientists or historians. 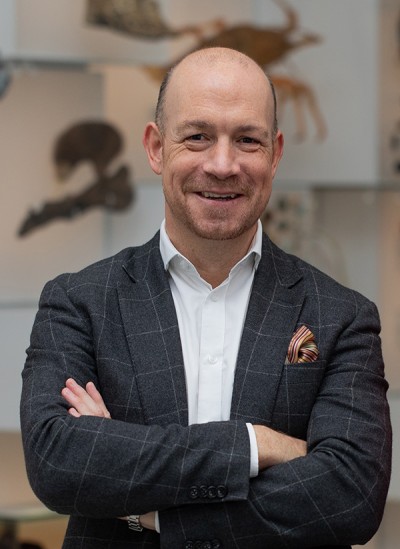 “One thing consistent across all programmes is that they are structured. As an educator, I love the fact that the museum is really prioritising those younger learners, because if you can engage them at that age, they’re going to be fans of the museum for the rest of their lives,” he says.

“And if you can get them to see that learning can be exciting and offer them the opportunity to be curious about all those weird and wonderful objects and different animals they may never have seen before, it really just opens them to a brand-new experience.”

Classes spend about an hour with the learning specialists, and learning dispositions are a main focus for the team.

“For us the key disposition is curiosity,” says Matthew.

“We use objects to really start to invigorate that thinking, which is why the new galleries are so important because they have all that wonder, interest and excitement that gets them innately curious and draws them into that learning.  We want them to leave us more curious than when they arrived,” says Matthew.

While digital tools are not a primary focus of Te Whiwhinga The Imaginarium, they are used in some programmes and in adaptable spaces called ‘Learning Labs’, which use digital projections to allow for immersive learning experiences.

“CSI Pukekawa – Citizen Science Investigations, is a science and nature-based programme where [children] use iPads to take photos of insects… and then we connect that to the iNaturalist website and scientists let them know what they are,” says Matthew

Every day, Matthew hears ‘wow!’ or ‘cool!’ from the floor and he believes that in a digital world, real objects can still inspire a sense of awe.

“I think it’s even more heightened because their daily lives are very much driven by screen time. They can see pictures of something, but to see something in real life and then to have the opportunity to touch and hold and feel: ‘That moa bone is so heavy!’; ‘Look at the size of that egg!’

“It’s quite refreshing to learn in the way we’re offering,” he says.

Papatoetoe North School has visited the new Imaginarium and been visited by the Auckland Museum team for two programmes: Myths and Legends, and Volcanoes.

“Teachers said the hands-on experiences with objects was the thing that really stood out for them. Students managed to get a deeper understanding that learning can be anywhere, anytime, with hands-on as well,” says Jill.

Teachers at the school had been looking at myths and legends through a science lens – such as the story of Maui and the sun and the physics of pulling, she explains.

“At the Imaginarium, we listened to the legend of Sina and the eel (a Samoan story about where the first coconut tree came from). We talked about it and we linked into the way coconuts can be used in science and technology,” says Jill.

“Then artefacts were passed around and children got to discuss what they thought they were, what they were made of, and they were shown some of the things that could be made from the coconut fibres.”

With many of the children having strong oral language skills, Jill says the visit to Te Whiwhinga The Imaginarium prompted many conversations afterwards.

“You could hear them talking and making those links between what they know and what you are trying to teach them,” she says.

A cross-curricular NCEA science and maths course at ASHS has resulted in deep learning about the physics involved in the principles of flight.

Students at Mt Richmond Special School wanted their classmate, who had the use of only one hand, to be able to join in cooking lessons...

A cross-curricular NCEA science and maths course at ASHS has resulted in deep learning about the physics involved in the principles of flight. Read more

Students at Mt Richmond Special School wanted their classmate, who had the use of only one hand, to be able to join in cooking lessons... Read more

Hour of Code in Minecraft:EE