Before Covid-19 saw schools closed and many sporting events postponed or cancelled around the country, tamariki from 12 primary schools and two intermediates joined together to participate in Upper Hutt’s second traditional Māori games. 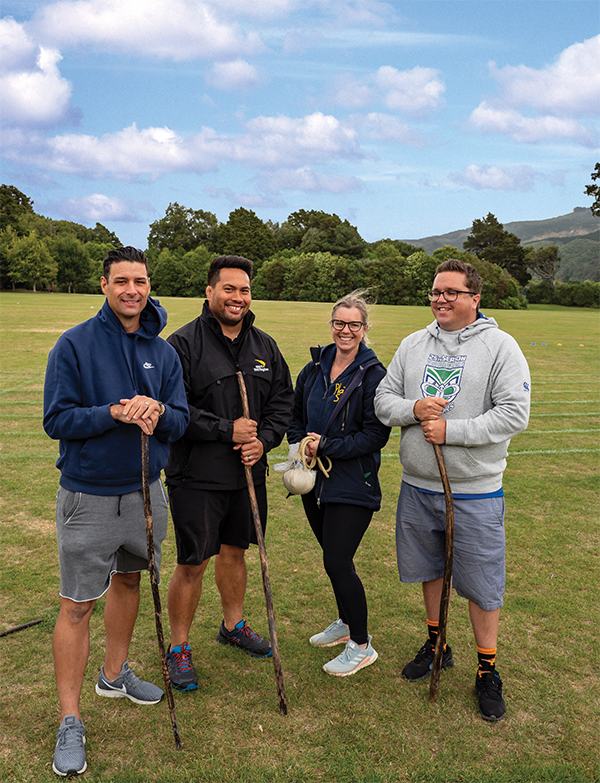 It was a blustery cold day at Trentham Memorial Park north of Wellington and about 160 tamariki intoned a karakia (prayer) in te reo before the games got underway.

“We noted the Highland Games there and thought it would be a good idea to have a similar cultural sports tournament for our Māori students. Upper Hutt’s first tournament was held in November last year and was a great success,” says Jarod.

Now the assistant principal at Birchville School, Jarod was working as a PE mentor with Sport New Zealand on Play.sport at the time. The Play.sport initiative was trialled in 45 schools in Waitakere and in Upper Hutt and was based on the holistic Māori model of health and wellbeing called Te Whare Tapa Whā(external link) developed by academic and psychiatrist Sir Mason Durie(external link).

Jarod worked alongside Shea and his Year 5 and 6 class at Māoribank School on a pilot programme, Hauora, based on Te Whare Tapa Whā, and he and Shea are keen to see other schools and communities run traditional Māori Games tournaments. 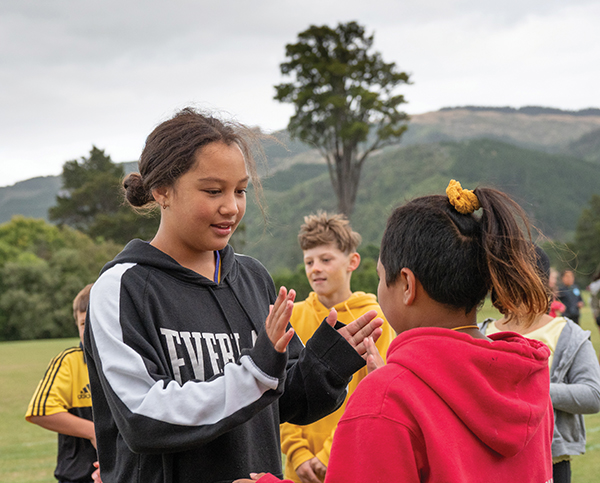 The second tournament, held in March, was attended by Year 5 and 6 students who identify as Māori. Tamariki from Upper Hutt’s 12 schools were divided into 12 cross-school teams. Students from the two local intermediate schools acted as tuakana-teina (buddy-mentors) to each team.

Each game saw two teams competing against each other, with some games requiring speed and coordination; others, like Pakiaka, saw children carefully backstep through a grid of sticks with their teammates directing them.

Jarod ran the game I te timitanga, where children face each other and learn to count from one to 10 in te reo, with actions.

“This game is about whanaungatanga (building relationships), while having fun in a non-threatening environment,” explains Jarod.

Traditional games for all Kiwis

Traditionally, Māori sport and games were about developing fitness, agility, skills and whanaungatanga.

“They are currently played by Māori kids in pockets around Aotearoa, but I am of the strong view they should be adopted by all New Zealanders.

“Whether they be Māori or non-Māori, it’s important they feel that Māori culture is relevant to them and helps to identify them as someone from Aotearoa. I think a lot of Pākehā kids can feel a sense of – not ownership – but belonging as well,” says Shea.

“It’s a game and you are trying to achieve a common goal as a team, but that’s not the most important aspect. First and foremost, these games are designed to enable Māori to achieve and experience success as Māori. It’s also about making connections. As teachers, we work really closely across our cluster and we want to provide opportunities for our tamariki to do the same,” he says. 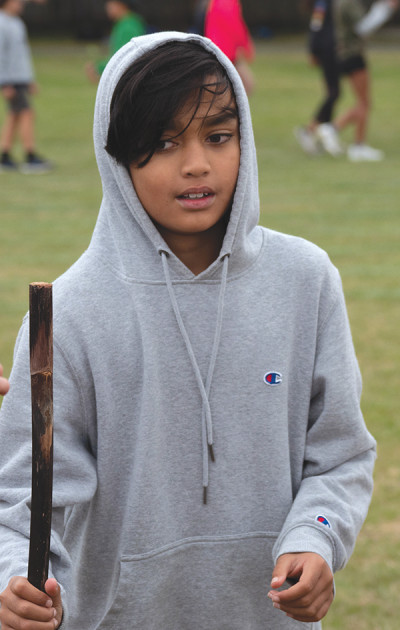 Quick reactions are needed for the game of Matau/Maui being played by Teral (Totara Park School).

Year 7 and 8 students from the two intermediate schools (Maidstone and Fergusson) were the kaitiaki/guardians for the groups and throughout the day identified students to receive a hauora award which embodies social, mental/emotional, spiritual and physical aspects of being.

Shea says traditional Māori games give Māori children a sense of mana and belonging, especially in a suburb like Upper Hutt, where the majority of the Māori population affiliates with other parts of Aotearoa.

“It’s giving those students a feeling of pride in their identity and culture,” he says.

“They can say, ‘I am going to this because I’m Māori, and I’m valued because of it’. They feel like tohunga – experts – and have cultural capital invested in what we are doing throughout the day. The games are more than a competitive outlet – they enable the participants to make sense of the world around them from a Māori perspective. That’s really important.” 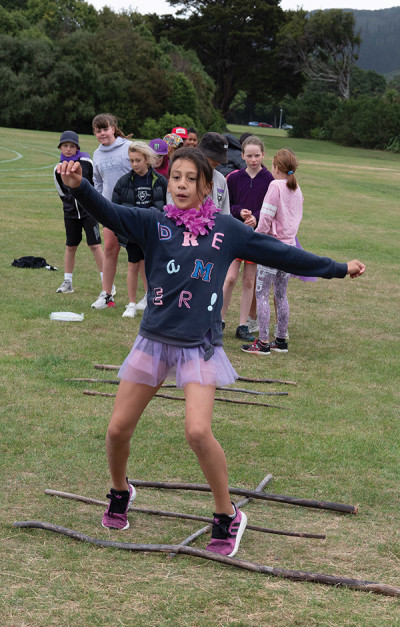 Full concentration is required to stay in the squares for the game of Pakiaka. Aryana (Māoribank School) shows how it's done, while Madison (St Brendan’s) looks on.

This Play.sport initiative was the precursor to Healthy Active Living(external link), a joint initiative from the Ministry of Health, Ministry of Education and Sport New Zealand, which will provide all schools and early learning settings with new resources ranging from new guidelines to health promotion staff and physical activity advisors.

Pembroke Chambers, regional manager for Sport Wellington, says a strength-based approach is taken, where a framework such as Te Ao Māori (Māori worldview) may be used. His team prefers to take a student-led approach, where children sometimes create their own games.

“We say to schools: ‘Here’s a physical activity and the learning around that can be shaped around your needs’. It’s about motivating kids who may not experience success in mainstream sport. These activities give them another kind of success,” says Pembroke.

Missey Edwards was on the sidelines at the March tournament, from where she was proudly spotting her daughter Riccah and various cousins. She’s a teacher aide and helps run the kapa haka group at Birchville School.

“This is for our Māori! It’s a good opportunity for them to feel part of something and it builds confidence. I wish I had this opportunity myself when I was young. It’s good for these children to interact with other Māori – hopefully they are uplifting and supporting each other, and seeing each other succeed,” she says.

Rebecca Thomson was another proud mum taking photographs to send to daughter Mekayla’s grandfather in Hawke’s Bay. Born in Upper Hutt, Rebecca affiliates with the Whangara Marae in Gisborne (home of the Whale Rider story). Growing up, she was deeply immersed in Māori culture, with many visits to her home marae, and Mekayla also has a deep love of her whakapapa.

“Last year she was in Pango (Black) team. We had just got our black hoodies from Whangara Marae and she was doubly proud to wear it at the tournament. It’s nice to see the kids proud to be Māori. Mekayla was shy, but in the last couple of years, she’s come out of her shell – maybe it’s because she’s feeling stronger in her Māori identity,” says Rebecca.

Mekayla (Year 6) says it was nerve-wracking when she attended the games last year because she didn’t know anybody, but adds, “This year I know everybody in my team! It makes me feel good and happy to be doing cultural things with other Māori kids. It’s fun because at school someone might look Māori, but not be Māori inside. At the games everybody is into the stories and the culture,” she says.

“I think it’s great they are playing some games that come from their culture and meeting kids from other schools. They get the opportunity to mix with their peers that they will eventually go to Intermediate with. It’s important they meet other Māori kids. They are at the age where they don’t want to be in the minority, but with events like this, they feel they are part of a community,” she says.

Ladainian is in Year 8, took part in the games last year and volunteered to be a kaitiaki this year.

“I think it’s really cool seeing the kids meeting each other and playing with kids they don’t know. It’s nice to meet other Māori kids – if they say they are from the same tribe, you could possibly be related. You feel connected,” he says.

How to start a tournament in your rohe

Our Lady of the Assumption, a Year 1–8 special character school in Ōtautahi Christchurch, is transforming its approach to physical activity.

Our Lady of the Assumption, a Year 1–8 special character school in Ōtautahi Christchurch, is transforming its approach to physical activity. Read more