An initiative aiming to expand the worldview of young children saw two early learning centres dancing and interacting with each other via a big screen – and learning that although they were oceans apart, they weren’t all that different. 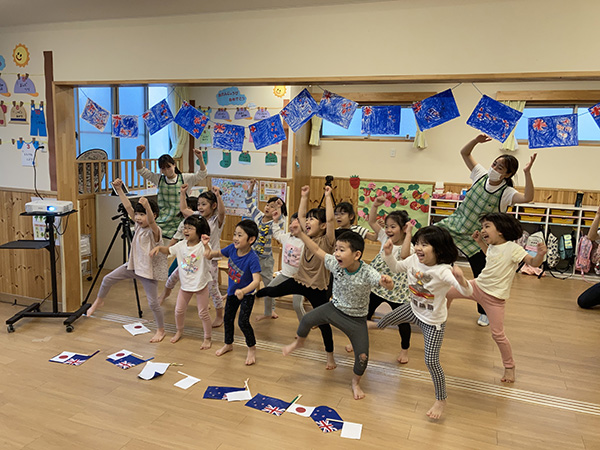 In May, children from Bella Montessori preschool in Kaiapoi linked up with Ashitaba Saginuma Nursery School children in Japan to learn a little about each other’s countries and tackle some environmental issues as part of the United Nation’s Sustainable Development Goals (SDG).

The children and their teachers happily sang, danced, played, and interacted together.

“Thinkalot inc. approached me earlier in the year and asked if I would be interested in linking up with an educational exchange between Japan and New Zealand with the focus on promoting environmental education,” says Christine Kirkeby, manager of Bella Montessori.

“I thought it would be great for the children to get to know a different culture and connect in a different way. The Japanese children and teachers speak [mostly] Japanese, and we only know a little Japanese,” she says.

“Afterwards, we asked our children what they enjoyed most about the day and they said that they loved playing with the children the most. The Japanese children said the same thing – so even though they didn’t have any common language, they still enjoyed playing together,” she says.

The international exchange was facilitated by Thinkalot Inc., a Japanese start-up company with a mission to expand the worldview of children.

“Children of this age group have no more, or less, prejudice, so if we can provide a proper programme, we think they can enjoy themselves honestly, learn, and accept each other’s differences,” explains Takanori Maede, president of Thinkalot Inc.

“We also want to provide young children with equal opportunities. Nowadays, even elementary school students can access overseas information by themselves, but for preschool children, the opportunity is limited by the family environment and geography,” he says.

The challenge is in how to attract children’s interest and keep them focused.

“Their knowledge and concentration are still developing, so simply connecting online is not enough to interact. We are improving the programme by incorporating games and quiz elements that children can enjoy, and constantly researching how to make it easy for children to understand the differences and similarities between countries,” says Takanori.

With a tuna puppet in a virtual watery environment, the Thinkalot staff facilitated the fun educational session using target 14 of the SDG – conserve and sustainably use the oceans, seas and marine resources for sustainable development.

“On the day, all of the children were enthusiastic and very engaged. It just goes to show that wherever children are, they behave in the same way,” says Christine. 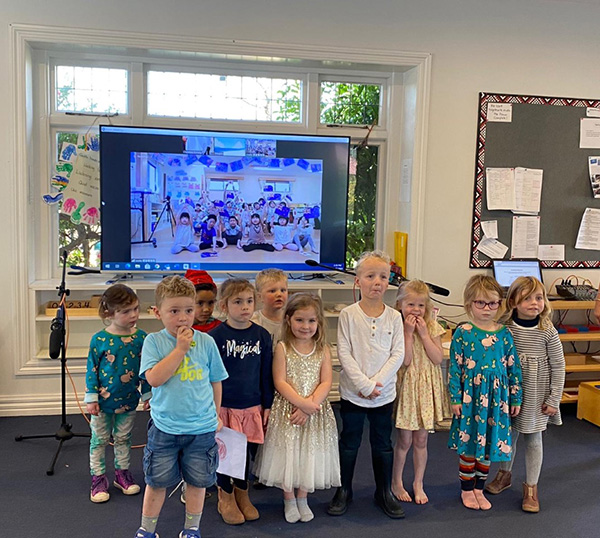 Tamariki from Bella Montessori in the foreground and their new friends on the screen after their cultural exchange.

Prior to the exchange, the two early learning services did quite a lot of scaffolding and pre-work with the children, with activities like making each other’s flags.

“Our children performed a haka and sang a waiata in te reo Māori. Initially, it threw them [in Japan] the day before, because the Japanese team were expecting English and we hadn’t factored that in.

Thinkalot has organised more than 50 exchanges this year, with countries including Australia, the Philippines, Kenya and Italy, and they hope to expand the programme even further.

“After these overseas exchanges, children have voluntarily become interested in learning about foreign countries in their daily lives,” says Takanori.

He says they heard from both Japanese and overseas preschools that the programme is a good opportunity to look back at the culture and tradition of their own country as a way of self-reflection.

Currently, Thinkalot is doing many event-like exchanges, but in future would like to create exchange programmes with pre-schools around the world that deepen relationships in the medium to long term.

As Montessori is worldwide, Christine also sees potential to connect with other centres around the world, and even engage in peer-teaching country to country. She says it’s a great way to use digital tools.

“I think it has huge potential if it’s used in the right way. We don’t have devices for children at Bella. We notice that even if children as young as six months get hold of a device such as an iPad or cellphone, we lose connection with them – they are completely tuned out.

“But our objective at Bella is to open our children’s minds and show them the diversity in the world – and give them lots of real experiences because we want them to be exposed to lots of opportunities,” she says.

Tamariki from Bella Montessori in the foreground and their new friends on the screen after their cultural exchange.