A digital exchange programme between children in New Zealand and South Korea is supporting ākonga to become global citizens, while making some friends along the way. 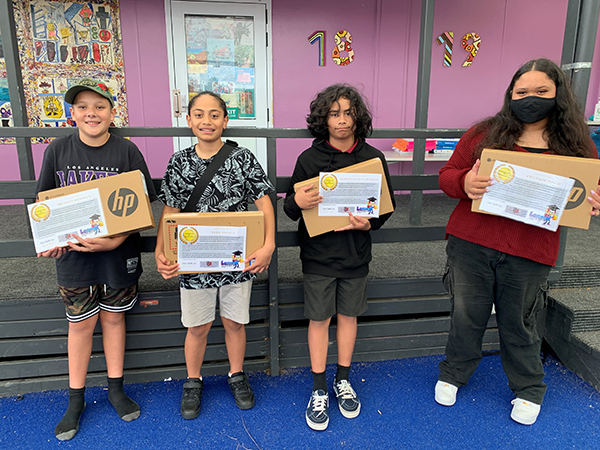 Chromebooks were gifted by LEL to Year 8 Sylvia Park School students, who were fantastic cultural ambassadors on the last New Zealand/Korea programme.

More than 1,200 New Zealand and international school students have taken part in a digital exchange programme, which has helped them develop leadership skills and cultural understanding, and establish friendships without borders.

The exchange started out last year as a pilot programme facilitated by Learn English Live (LEL) and supported by Education New Zealand Manapou ki te Ao (ENZ). A few schools in South Korea, and Sylvia Park School in Tāmaki Makaurau initially took part, but by the end of the year the programme had grown with participation from more than 30 schools in both countries. With positive feedback from both home and abroad, the programme is being extended further.

Responses were positive from both a New Zealand and Korean point of view, says William Clarke from Learn English Live.

Around 70 percent of New Zealand students said they made a South Korean friend through the digital exchange forums while South Korean students highlighted the improvement in their English language skills.

Now Japanese schools – and even a school in Italy – have come on board.

Each week students from both countries meet online, and converse in English, and also exchange cultural learnings. This model enables students to teach and learn from one another, and execute a successful peer-to-peer model

William says students are given guidelines to help stimulate conversation, but are encouraged to take the lead themselves within their online groups. 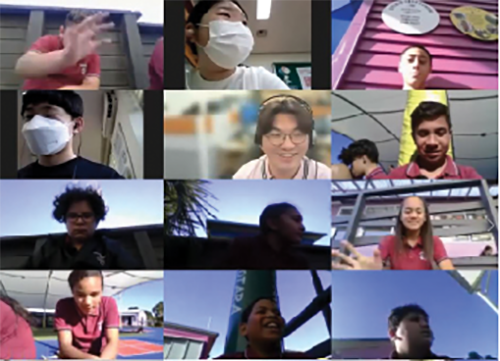 Students and teachers from Gangwon province in South Korea engage with local students from Tāmaki Makaurau.

Using Zoom, they move into breakout rooms with a mix of New Zealand and international students. Trained facilitators move between the rooms and check that things are going well. They then gather back together in the main room to reaffirm the learning of the exchange and reflect on how it all went. But William says each session is different.

To further enhance these cultural exchanges, a collaborative approach is used whereby teachers from ‘both sides’ co-create the content and lesson plans. And although the students are given these as guidelines, they can deviate from this as they see fit.

William says this not only assists with providing structured learning for students, but also empowers teachers to take the lead as they build their confidence to work with international students.

He says it is not necessarily language learning but more about cross-cultural relationships and friendships.

While the video medium can seem a little more comforting than meeting in-person for international students, William says the sessions were scaffolded so that the New Zealand children took the lead in the beginning – transitioning into more of a
50-50 model as the exchange progressed.

The classes are run during school hours and content is linked to The New Zealand Curriculum. Teachers can tap into the classes as a resource for a wide range of uses.

The sessions are also in line with ENZ’s goal to develop global citizens as part of the New Zealand International Education Strategy 2018-2030.

But it is flexible – even fitting into social sciences, if they might be learning a concept such as global citizenship.

“The beauty with New Zealand teachers is that they are really creative, so they say ‘I could take it and just use it for this’ so even though we show them the links and also the links to the key competencies, it’s like a menu choice,” says Teri.

One school in Korea’s Gangwon province even requested for the exchange to be centred around STEM.

Schools are already using virtual learning platform ‘gather town’ and LEL is currently looking at how to incorporate this into the programme. Teri says this is in line with the digital curriculum and developing digital skills, while other skills include global citizenship and whakawhanaungatanga – relationship building.

“You could look at the whole curriculum, and say ‘yes there’s that, yeap, there’s that’, definitely the key competencies – really strong in there,” says Teri.

She adds that students developed their cultural understanding and some students pointed out the value of learning to not accidentally offend someone. Many were looking ahead to becoming global travellers and wanted to know more about what to expect and how to behave when visiting another country.

The programme is a good way for some students in low-decile schools who might not otherwise have a chance for such a cultural exchange, says Teri.

William also emphasises relationship building, cultural understanding and leadership skills developed in the programme, “especially from such a young age”.

“You are asking these students to not just lead and present a lesson but you’re asking them to do that to a stranger at the very beginning. And I never had an opportunity like that when I was their age,” he says.

From a Korean perspective, a teacher reported that children were shy to use their English at first.

Hyesung ‘Zoe’ Lee, a teacher from Buron Middle School in Korea, commented that some of the Korean students were quiet at times, but that was because they didn’t know what to say. For many of them, it was the first time to talk to foreigners and they were nervous and excited.

Zoe is keen to extend the programme, and  already has ideas about what future sessions could include, such as an introduction to traditional Korean crafts and games. 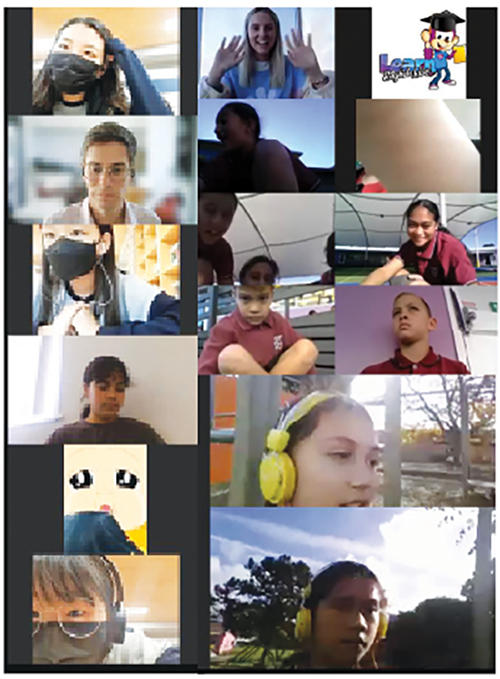 The aforementioned Korean school focusing on STEM had a practical approach, sending over materials for Sylvia Park students to make things out of, such as ‘Jegi Chagi’ – a traditional toy.

Then the New Zealand students would teach their Korean peers weaving, or how to make poi.

Sylvia Park School students participating in this part of the exchange also shared Māori stories, such as that of Maui and the sun, and then worked with the Korean students to create their version of a trap to catch the sun. Koreans would then reply in kind with their own traditional story.

“Every school in New Zealand can bring their own flavour or their own culture share. It’s all about showcasing their school as well,” says Teri.

That uniqueness takes in not just national culture, but the nature of each school involved, adds William.

This can lead to some unique and humorous experiences. One such exchange occurred when some students from Sylvia Park took their laptops around the school on the last day – showing the marae, school grounds and greenhouse.

“Sylvia Park has some pet kunekune pigs and I just remember this camera slowly panning to these pigs and you see all these Korean kids’ eyes light up. And I have this feeling that somewhere in Korea there’s a bunch of kids that think that every New Zealand school has these kunekune pigs in them,” laughs William.

Similarly, Opononi Area School had shown video footage of their area, perhaps leading their Korean counterparts to believe all New Zealanders lived near the beach. And further understanding comes from practical experience, such as some students trying out their Korean language skills to bemused proprietors of a Chinese-owned store.

A few further surprises are surely in store as ākonga increase their global awareness and progress towards becoming global citizens.

LEL has an upcoming programme with South Korean schools in term 2. If your classroom, school or community would like to participate in one of these exchange sessions, contact William Clarke at info@learnengish-live.com.

It might be useful later in life – knowing about their customs and not to accidentally offend anyone. William, 11, Sylvia Park School

It boosts your confidence and your ability to speak clearly. Taezjha, 11, Sylvia Park School

I really enjoyed talking to the Korean students, it was a great opportunity for me to teach them some English as well as learning some Korean words and sentences. I enjoyed meeting new people across New Zealand as well. Vao Matua-Kuresa, former Papakura High School student

One of our students made an instant connection with one of the Korean students. They were similar in age and when they talked to each other, they discovered that they had similar hobbies as well. They have now connected on social media. Ashley, teacher at Rowendale Primary School

My son has really come out of his shell. He loves talking with the Koreans and thinks that he now has ‘real friends’ from the other side of the globe. Mother of Lucas, 9, Rowandale Primary School

I and all my students were very glad to participate in such a great opportunity. Actually, most of them are having their first experience of communicating with foreigners. So they are very nervous, but at the same time, looking forward to each session. Teacher from Seongdeok Girls’ Middle School, Korea

Korean students are so excited to talk about what they did and they are so interested in the New Zealanders. Teacher from Buron Middle School, Korea

Is your school or kura interested in international programmes?

Education New Zealand Manapou ki te Ao is the government agency responsible for taking New Zealand’s education experiences to the world. With offices in New Zealand and 13 global locations, their role is to deliver the Government’s vision for international education by promoting Aotearoa New Zealand as an excellent education and student experience. To address the unprecedented challenges presented by the Covid  pandemic, ENZ is playing a key role in developing a resilient, sustainable and globally competitive sector.

Language weeks in schools are an opportunity for students from different ethnic groups to be loud and proud about their cultural identities.

Language weeks in schools are an opportunity for students from different ethnic groups to be loud and proud about their cultural identities. Read more