Otago Harbour and the surrounding countryside has been the classroom and playground for generations of children at one Dunedin school, which plans to capture some of the rich history of the area thanks to a grant they received in 2020. 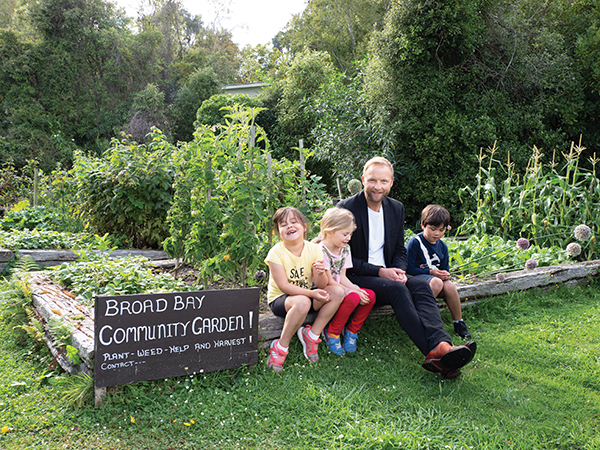 Broad Bay School will use a Canon Oceania Community Grant for a project to construct a 3D model of Broad Bay and Otago Harbour which will connect people to the recorded oral histories of local people through QR codes.

“We’re really trying to give the children a sense of who they are, a sense of identity and of knowing deeply where they’re from. So, it’s about understanding the past, the present and the future.

“We’re basically at the epicentre of an ancient shield volcano which eventually eroded and created this harbour, which brought in marine and bird life,” says principal Greg Macleod.

“Māori came and looked after the land, then there was the interaction with the whalers and sealers and then the early Scottish settlers. That changed the landscape of this area. Then Dunedin hit the goldrush and there was a lot of money in Dunedin and a lot of wealthy people built holiday homes out here,” he adds.

The school was established in 1877 and when the 60th anniversary was held in February 1938, the Evening Star described Broad Bay in the 1870s as a thriving little settlement with increasing numbers of children and no school.

“Eventually, however, the persistence of the Broad Bay residents was rewarded, but not before they had agreed to find a portion of the expense, the Education Board contributing £203 towards the cost of the erection of the school, £75 towards the teacher’s residence, and £60 for fencing,” reported the Star.

Anita Wates (née Wilson) was a pupil at the school in the 1930s and was recently interviewed by an oral historian and children from Broad Bay School as part of the oral history project. She described Broad Bay as the ‘Riveria of Dunedin’ with families such as the Speights having holiday cribs in the bay.

She told them about an outrigger canoe her father built from corrugated iron which they used in the harbour ,and crazes for different games such as marbles, hop scotch and wooden spinning tops. The outdoor environment was a significant part of her childhood and she still remembers being allowed to touch an albatross chick.

“Nature studies was very important. We went for nature walks and studied certain things, then had to go and write about it. The head teacher, Miss Sutherland, was a conservationist and taught us to be conservationists,” she recalled.

Several decades later, Bob Stanley and his nine siblings attended the school. He remembers roaming up to Larnach’s Castle which was derelict in those days, stealing apples and a kindly school neighbour who made vegetable soup in the winter for the school’s 90 or so pupils. She used produce from the large school vegetable garden which was tended by the children, who also mowed the lawns. 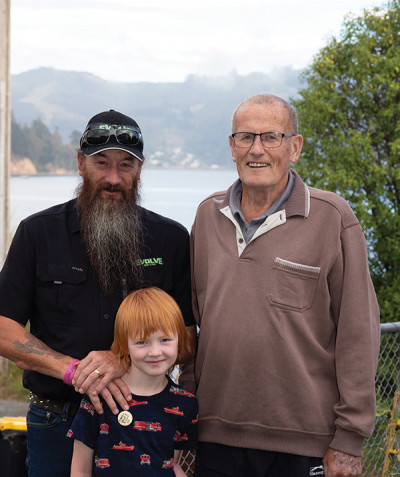 Children were always in, or on, the sea at their doorstep and a favourite memory was of playing cricket on the sandbank in the middle of the harbour, says Bob.

“One thing we used to love doing, was we would swim from the Broad Bay Boating Club out onto the sandbanks at low tide and the parents would come in their rowboats and we’d have a game of cricket out there. If you hit the ball on the full and the kids had to swim after it, that was a six! It’s in the middle of the harbour – at low tide, it’s almost like a paddock,” remembers Bob.

Bob’s son Mike attended the school in the 1970s and reckons school was pretty similar to his dad’s day.

“I think my boyhood was probably the same as Dad’s – we’d get home from school and get straight into the harbour – year-round, rain, hail or shine. Sailing and canoes. Playing up in the paddocks – we’d go up to Larnach’s Castle – it would have been open then. We’d spend 99 per cent of our time outside – we’d go and camp down at The Pyramids when we were about 10, 11 – we thought we were on our own but the farmer there was keeping an eye on us!”

“We sat at desks, we did what we were told. I don’t really remember any schooling – I just remember playing. We played games like bullrush that you’re not allowed to play anymore,” says Mike.

(Tamariki listening to the interview said: ‘I want to play that so badly!’)

“When Mike was a boy, a woman in her 80s used to swim every day and she always asked one of the kids to go swimming with her – Mike used to often swim with Mrs Ritchie,” adds Bob.

Mike’s son Blake attended Broad Bay School in the 2000s and grandson, Jethro (5) is now at the school. 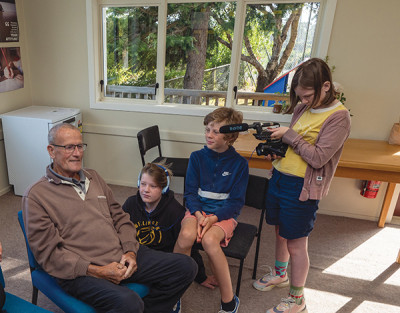 Bob Stanley reminisces about his school days with Noah, Asher and Mila, who are involved in the oral history project.

“I think school nowadays is brilliant. When I was at school, you went to your classroom – there were about 35 of us in it – all the desks were in line and you didn’t say a word until you were spoken to,” says Bob.

While Broad Bay is more suburban than rural today, Greg is determined that tamariki at the 33-student school have opportunities to experience the natural environment that surrounds them. In Bob and Mike’s day, this generally happened outside school hours, but nowadays it’s integrated into the curriculum.

There are two composite classes, with teachers making the most of the opportunities afforded a school in the heart of the Otago Peninsula.

“I think educators need to find out what they have on offer in close proximity to get kids outside of classrooms as much as possible. In this day and age there’s so much reliance on kids being indoors on devices. I see that we’ve got an obligation to teach children about getting themselves out in the environment, you’ve got to teach them how to be safe and make good judgements. That’s a big part of our programme here.

Mike Stanley helps out with the water safety programme which, once a week during summer, sees the entire school learning to be safe in the water. Greg is a volunteer life guard and believes these skills are important, but it goes beyond that.

“I always use water safety as an analogy to learning – when we feel uncomfortable in the water, that’s good because it means we’re pushing beyond our comfort zone. We’re challenging their fears physically so that when they have emotional fears that come in the form of abstract fears, they can meet them.”

Combining the rich natural environment enjoyed by the children through the decades with the modern curriculum empowers children and helps their mental health, says Greg.

“In 2019, we were involved in the Climate Strike protests – we were in town that day protesting, because that’s about the future. It’s about giving students a voice and teaching them that what they do does matter.

“It’s empowering them to understand that the little things they do here, do make a difference and that if we all looked after our patch and treated it with respect, that’s doing something. Anxiety is becoming more prevalent and getting in touch with the environment, being in the water, around trees, in the open air is helpful. There’s that wellbeing aspect, but it also empowers them to feel like they’re doing something,” says Greg. 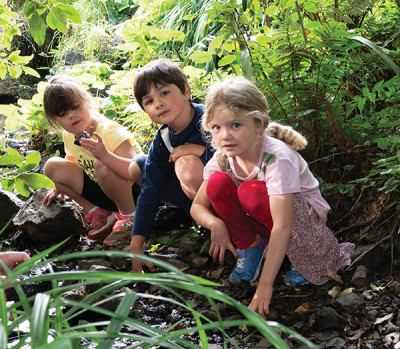 Time spent in nature has always been a feature of the school.

The school is also involved with STOP (Save The Otago Peninsula) and as kaitiaki of a nearby stream, has been doing riparian planting since 2013.

“The creek runs into the harbour and I want the children to understand that we swim in this harbour, we want it to be healthy. We’ve learnt about the ecology of streams, we’ve measured water quality, water flow, invertebrate life to understand if we have a healthy environment.

“My vision for the school is about utilising the environment and the people in the community to allow our children to be confident citizens in a local and globalised world. We’re really trying to get them to be comfortable with who they are, be able to communicate effectively and with confidence so that they can have a voice,” he says.

In 2020, when tamariki from Broad Bay School heard they had been awarded $5,000 in Canon equipment and an equal amount in cash, they “went berserk”, says principal Greg Macleod.

The school has also secured funding from the Dunedin City Council to employ Kāi Tahu artists Ricky Ngāmoki and Alex Whitaker from Puketeraki Marae to work with the students to conceptually design a 3D sculpture.

“We’ll create a 3D physical map or representation, which may be a metaphorical representation of the harbour and Dunedin. The digital archives will be stored and located geographically in a virtual 3D repository for everyone to access. That will be the gateway that will connect to the recorded audio-visual histories of the local community.

“Dunedin local Ian Taylor, from Taylormade Productions, has expressed an interest in working with the school. Otago Polytech is also interested in working with us. We’re trying to work with our community and ask the question: what does it mean when schools work with their various communities?”

Greg says the project will combine learning about modern technologies, which could include virtual and augmented reality, with local history.

“We want to be on our feet and running ahead of the Aotearoa New Zealand’s histories curriculum coming up.

“We’ve always had in our charter ‘Engaging the Community’, but it asks who is our community and what do we know about them? Already we’ve had a 94-year-old ex-pupil come back and the kids get a sense that there is a rich history in this area that they should learn about and celebrate,” says Greg.

Tamariki at the school today want the project to be finished before they leave school, but they are also excited and proud about the role they are playing in this project.

“I’m excited about the art side of it – visualising. I’m quite excited to find my place in this area. I’m Pākehā – and will feel more connected,” says Mila (12).

“I’m very interested in the technology side of things. I had an idea that when the QR code is scanned, a virtual person would start talking and we could use an AR input: the person would be talking in the location where you are,” says Noah (12).

“I’m interested in the stories and the geology. We’re looking at the Dunedin volcano at the moment. I’m hoping that we will be able to do drawings, a movie. I see the fact we’re on an old volcano as being a big part of the project,” says Oli (12).

“I’m not from Dunedin or New Zealand, I’m from Japan. I don’t know much history about it, so I’m very excited to do this project because I think I’ll learn a lot. I’m also very excited in the technology things as well – the recording and editing,” says Keisuke (12).

“I’m trying to empower them and make them understand that they can be storytellers – that they can achieve what they need and want. That there are no barriers except for their own hurdles,” adds Greg. 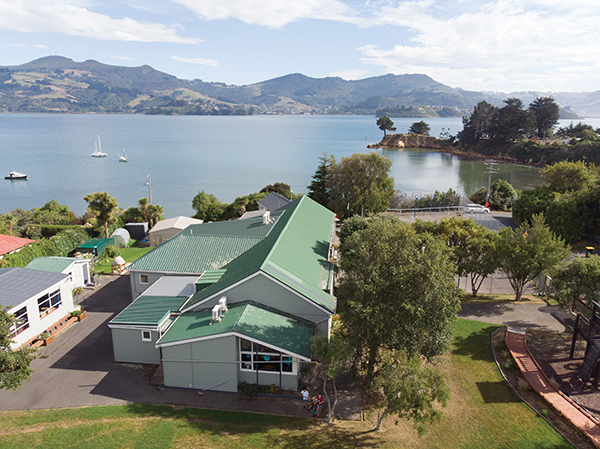 Broad Bay School with Otago Harbour at its doorstep.

Students at Nelson's Waimea College have been working with local mentors, council and community groups to improve the habitat of an elusive wetland bird.

Students at Nelson's Waimea College have been working with local mentors, council and community groups to improve the habitat of an elusive wetland bird. Read more