The entire Maungatapu School community in Tauranga is eagerly anticipating its Matariki Ball, which will be held later this term as part of a school-wide approach to celebrating and learning about Matariki. 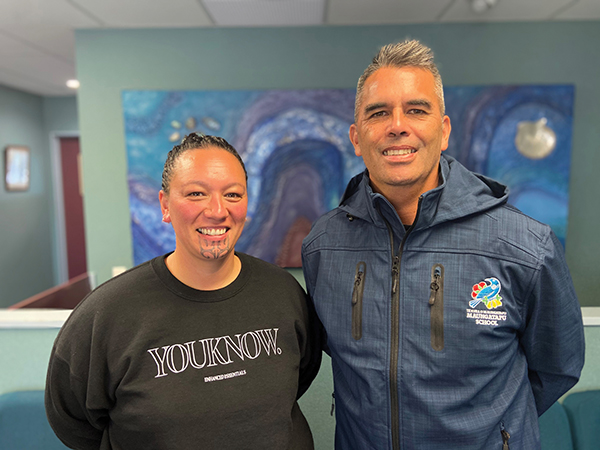 In principal Tane Bennett’s office is a 1984 class photo from Maungatapu School. He points to a kid in the third row. It’s him. It’s no surprise that – now as principal – Tane is passionate about his community.

“One of our key goals is to continue to strengthen relationships with our whānau, hapū and iwi and we’re always looking for ways to do that,” he says.

“We have been waiting for an opportunity to lead a community event that we can call our own, one that brings together our kaumātua and their mokopuna.”

The Matariki Ball presented itself as the perfect opportunity and is set to become Maungatapu School’s special kaupapa.

The Matariki Ball will take place over the course of week 9 this term at Hairini Marae, with students from each syndicate attending a different night along with a grandparent or whānau member.

The children have learnt special karakia for the night. They will dance with their grandparents and sing waiata as entertainment. They will also bring photos of loved ones who have passed on as an opportunity to remember them.

At the end of the night, each child will inscribe in lanterns their hopes and dreams before releasing them into the sky with their grandparent. This is to embrace the significance of Hiwa te Rangi, one of the stars of Matariki.

There will also be a cake cutting to mark Maungatapu School’s 140th birthday – it is one of the oldest schools in Tauranga.

The Matariki Ball was initially the brainchild of former assistant principal, Ngaire Paki, and has been held each year since 2015 for the school’s rumaki classes, Te Pūwhaariki.

This year, they are upscaling the event to include the whole school and their whānau. It’s all part of a drive to normalise and promote te ao Māori across the school, beyond Te Pūwhaariki.

Te Ara O’Brien, senior teacher of Te Pūwhaariki, says the senior leadership team has been instrumental in this push. She sees the Matariki Ball as a great way to break down any fears or uncertainty around kaupapa Māori.

“We just want to share it and show how you can celebrate Matariki. It doesn’t have to be a kaupapa Māori where you have to know everything,” says Te Ara.

“There was a little hesitancy among our staff,” she says. “But we’re making a video to show what the Matariki Ball will entail, to emphasise that it’s basically about having fun with your grandparents and remembering loved ones.”

In the build-up to the event, the whole school is learning about Matariki this term, with each syndicate taking on a different whetu of Matariki. At the end of the term, following the ball, each syndicate will present their learnings to the parent community in a special assembly.

“We’re all sharing in the learning and Te Pūwhaariki is just there to guide, which is really cool,” says Te Ara.

Drawing on the knowledge and expertise of their local hapū and community, and that of their staff, the school is growing a strong pool of resources around Matariki from their local context, for teachers to develop programmes to suit their learners.

With the announcement of Matariki as a public holiday, beginning from next year, Tane believes now is the right time to embrace Matariki together as a school community.

“I don’t want our tamariki to think it’s just another day off. I want to introduce an understanding of what Matariki means so they understand its significance.”

Supported by her whānau and school, a passionate young wahine led a two-year campaign to get reo Māori instructions in her school

Supported by her whānau and school, a passionate young wahine led a two-year campaign to get reo Māori instructions in her school Read more

Live Online Course: Working with Children with ADHD (Module 2 and 3)

Get Your Human Rights Creative Thinking Cap On!